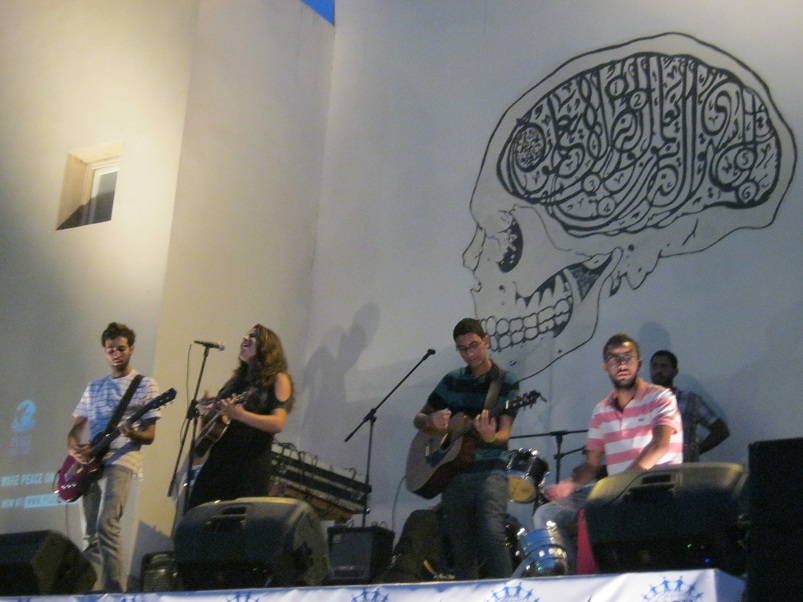 This year, Peace One Day was celebrated in Cairo, at the Darb 1718 Contemporary Art and Culture Centre. It was organised by Masterpeace, BikyaBookcafe, and CISV Egypt with the objective of celebrating not merely an absence of war, but a peaceful state of mind and co-existence.

On 21 September, despite the horrors our world has seen, we gathered in defiance against greed, prejudice, and hate.

The event was unlike anything I have ever seen in Cairo. Hundreds of people; families and couples, Egyptians and foreigners, gathered at Dar 1718. Keeping to the theme of peace, people wore bright colours and created a festive atmosphere which I could only describe as a hippy-fest sans drugs.

“The biggest obstacles to peace,” one of the attendees, Omer Omen, said, “is bigotry and close-mindedness. What we need in Egypt is round table interfaith discussions.” To Omen peace is spiritual, psychological, and emotional.

You were transported to another world, where there were only equals and friends. As the bands began to play around five pm, the crowd thickened. In total there were ten bands in the line-up, each was given a half an hour set.

Each musician brought their own unique vibe. There were cover songs carefully reconstructed to create a unique narrative in their own right, such as Ahmed Safi El-Deen’s unique Arabic-English take on Hotel California by the Eagles.

Some played their own music, whilst others would combine three songs into an Arabic-Spanish-English mix which managed to retain an enjoyable quality.

And there were booths, run by local NGOs, promoting several volunteering programs. There was the Spirit of Youth Association, an NGO devoted to tackling environmental awareness through door-to-door recycling campaigns.

Wataneya Society, an NGO committed to helping orphans and orphanages. Small stalls selling pottery and jewellery. And a children’s corner meant to entertain and inform whilst giving the parents a small break to enjoy the festivities.

Leaving the event was harder than I thought, for within the confines of the Darb 1718 centre there was peace. For those short hours, which went seemingly in the blink of an eye, there were Christians alongside Muslims who danced voraciously to whatever tune was played.

The crowd was not divided by their faith, gender, or colour but were united under one common notion of peace, as abstract as that may be. Beyond those walls lay the rest of the world, where stares laden with assumptions judge you with every step.

The very real problems facing Egyptians; poverty, education and health; remind us how far we have yet to go before festivals of peace can carry meaning to the masses.

The true meaning of this day has its roots in the United Nations. Initially proposed by Costa Rica and the United Kingdom in 1981, it was solidified as an annual event in 2001. On this day, the UN demands a global ceasefire be respected and a day of non-violence is respected.