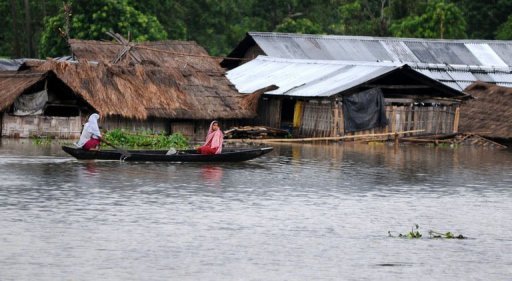 India (AFP) — Floods have forced more than one million people to flee their homes in northeastern India, where authorities have called a health alert, officials said on Monday.

“So far 18 of 27 districts of Assam have been hit by floods with more than one million displaced and 11 people drowned in separate incidents in the past week,” the Disaster Management agency said in a statement.

Rescue officials said about 2,000 villages had been hit by overflowing waters from the rain-swollen Brahmaputra River.

Himanta Biswa Sarmah, the health minister of Assam state, told AFP that a “maximum health alert” has been sounded in the devastated zone.

Other officials said the affected people had been evacuated to temporary shelters on higher embankments and to schools and colleges unaffected by the second round of floods since July in Assam, which borders Bangladesh.

Nearly 130 people were killed and six million displaced by the floodwaters in Assam two months ago, which came during India’s June-September monsoon.

“We have dispatched doctors and paramedics to ensure that there is no outbreak of disease,” Sarmah said in Guwahati, Assam’s largest city.

The wildlife park is home to the world’s single largest population of one-horned rhinos. A 2012 census in Kaziranga counted 2,290 of the rhinos, out of a global population of 3,300.

The species declined to near extinction in the early 1900s and is listed as “vulnerable” by the International Union for Conservation of Nature.

Kaziranga has fought a sustained battle against rhino poachers, who kill the animals for their horns, which fetch huge prices in some Asian countries where they are deemed to be an aphrodisiac.

In neighbouring Pakistan, flash floods triggered by record rains have affected around 700,000 people and destroyed hundreds of thousands of acres of crops in the south-west of the country, officials said.

At least 51 people have died across the impoverished province of Baluchistan and Prime Minister Raja Parvez Ashraf on Sunday declared three districts as calamity-hit areas.