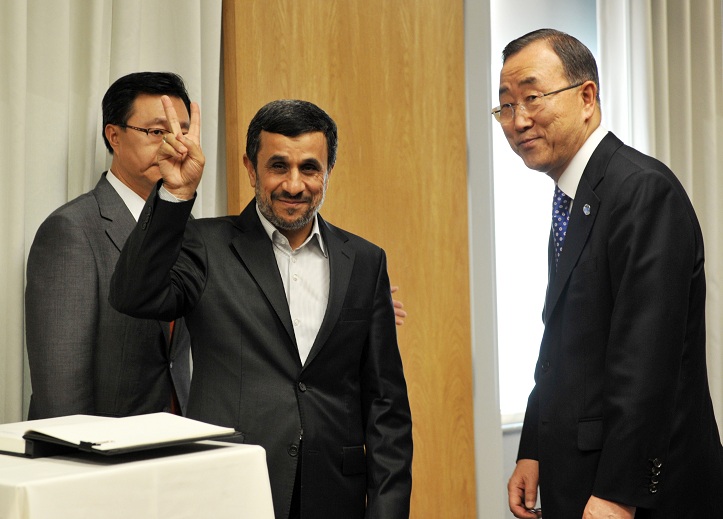 Iranian President Mahmoud Ahmadinejad dismissed threats of Israeli military action but expressed little hope for diplomatic progress with the US in an hour long interview published on Monday by the Washington Post. The interview came a day after Ahmadinejad was warned of the dangers of inflammatory rhetoric in a meeting with UN Secretary General Ban Ki-Moon, following a series of aggressive comments from Iranian military leaders.

In the interview Ahmadinejad boasts that “We, generally speaking, do not take very seriously the issue of the Zionists and the possible dangers emanating from them.”

President Ahmadinejad’s is in New York to attend the annual UN General Assembly meeting this week. Ahmadinejad will speak in front of the UN general assembly on Wednesday for the final time before he leaves office next year, after two five-year terms. His previous appearances at the General Assembly have been marked by controversial attacks against Israel and the west.

There has been an intensifying flurry of threats between Israeli and Iranian officials over the last month. Israel has threatened to preempt the Iranian acquisition of nuclear weapons capability before Iran reaches the point at which intervention is unfeasible. Iran continues to insist that its atomic energy ambitions do not include nuclear weapons.

Ban Ki-Moon’s press office stated that during the meeting “the secretary-general drew attention to the potentially harmful consequences of inflammatory rhetoric, counter-rhetoric and threats from various countries in the Middle East.”

Ki-Moon told Ahmadinejad that Iran should “take the measures necessary to build international confidence in the exclusively peaceful nature of its nuclear program.”

Speaking to the Washington Post, Ahmadinejad was incredulous of claims that the west was willing take Iran’s offers of assurance seriously.

“We have always been ready and we are ready… But experience has shown that important and key decisions are not made in the US leading up to national elections.” Ahmadinejad said, regarding a deal to limit the stockpiling of nuclear material by Iran, if it exceeded the needs of the civilian energy program.

Speaking earlier on Sunday, before Ban Ki-Moon’s meeting with President Ahmadinejad, Iranian military officials responded to the possibility of Israel forcing military action before the US elections.

Speaking on an Iranian state-owned Arabic language television channel, Amir Ali Hajizadeh, a Brigadier General in the Islamic Revolutionary Guard Corps, was quoted as saying that Iran could launch a preemptive strike on Israel, according to Al-Arabiya.

“We cannot imagine the Zionist regime starting a war without America’s support. Therefore, in case of a war, we will get into a war with both of them and we will certainly get into a conflict with American bases. In that case, unpredictable and unmanageable things would happen and it could turn into a World War III.”

According to Hajizadeh, US facilities in Bahrain, Qatar and Afghanistan would be targeted. “There will be no neutral country in the region. To us, these bases are equal to US soil.”

Among Hajizadeh’s audience were prominent Gulf representatives, who have strong military ties with the US but may fear the economic effects of war on the region’s business hubs.