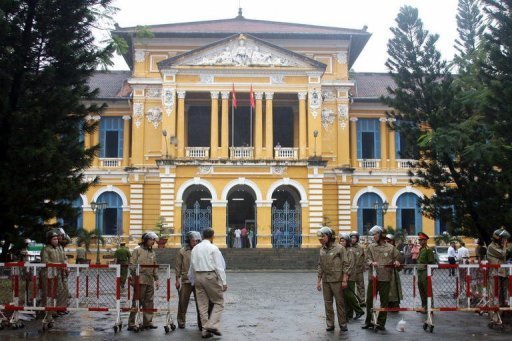 HO CHI MINH CITY (AFP) — A court in southern Vietnam jailed three bloggers on Monday for “anti-state propaganda”, including one whose case has been raised by US President Barack Obama, at a brief but dramatic hearing.

After a trial lasting just a few hours, high-profile blogger Nguyen Van Hai, alias Dieu Cay, was sentenced to 12 years in prison, while Ta Phong Tan, a policewoman-turned-dissident whose mother self-immolated to protest her detention, was given 10 years and led from court screaming.

“Their crimes were especially serious with clear intention against the state,” said Nguyen Phi Long, president of the court in Ho Chi Minh City.

He added the pair had “caused disorder” in the court and so were not allowed to make closing statements. “They must be seriously punished,” he said.

Phan Thanh Hai, the only one of the trio to plead guilty, was handed a four-year term.

Tan, whose mother died after setting herself on fire in front of a local authority building in July in a desperate protest against her daughter’s detention, was led out of the court wailing.

The 43-year-old, who was wearing a red t-shirt and looked calm but unhappy during proceedings, broke down after the verdict and was heard shouting “objection!” as she was escorted to a waiting car and driven away.

The bloggers were charged with conducting propaganda against the one-party communist state under Article 88 of the criminal code, which rights groups say is one of many “vaguely defined articles” regularly used to prosecute dissidents.

The US Embassy in Hanoi said in a statement released after the hearing ended Monday that it was “deeply concerned” by the verdict, calling upon Vietnam to release the bloggers.

The charges relate to political articles they posted on banned Vietnamese website “Free Journalists Club” as well as their postings on their own blogs, denouncing corruption and injustice and criticising Hanoi’s foreign policy.

All of the defendants will also have to serve between three and five years under house arrest after they complete their prison sentences.

In a speech that was curtailed when the audio feed from the courtroom to an observation room for diplomats and journalists was cut off, Nguyen Van Hai said he had never been against the communist state.

“I just feel frustrated by injustice, corruption, dictatorship which does not represent the state but some individuals.

“According to Vietnamese laws, citizens have the right to freedom of speech and it is in accordance with international treaties to which Vietnam is party,” he said before the sound was cut.

But Court President Long said the trio had “abused the popularity of the Internet to post articles which undermined and blackened (Vietnam’s) leaders, criticising the (Communist) party (and) destroying people’s trust in the state.”

A lawyer acting for Nguyen Van Hai, whose plight has been highlighted by Obama, attacked the proceedings, telling AFP that the court “did not allow discussions between lawyers and prosecutors.”

“I told the court that Nguyen Van Hai is innocent. So it is not fair to judge and condemn him under Article 88,” Ha Huy Son said after the verdict was announced.

A source at Ho Chi Minh-City People Court where the trial took place told AFP on condition of anonymity that Nguyen Van Hai and Ta Phong Tan “rejected totally” the charges against them and would likely appeal.

Rights groups including Human Rights Watch and Amnesty International have repeatedly called on the Vietnamese government to drop the charges and release the three bloggers.

Vietnam bans private media and all newspapers and television channels are state-run.

Reporters Without Borders ranked Vietnam 172 out of 179 countries in its 2011-2012 press freedom index and identified the authoritarian state as an “Enemy of the Internet” because of systematic use of cyber-censorship.