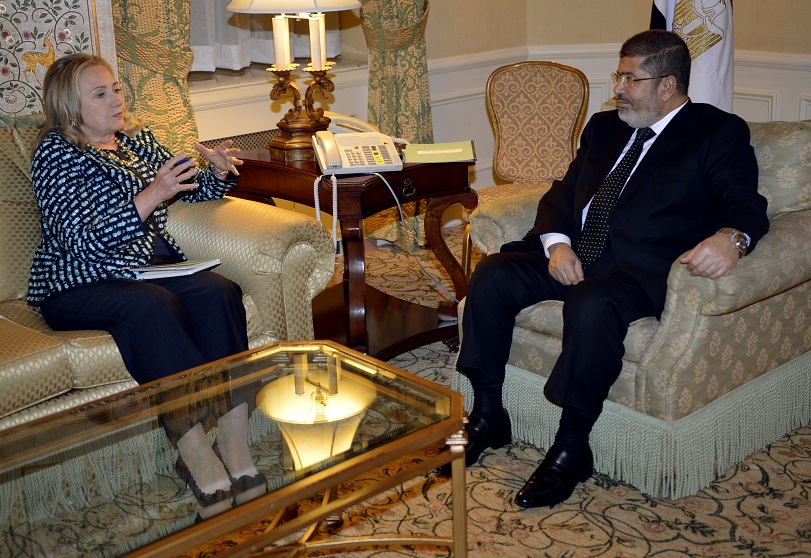 President Mohammed Morsy met with US Secretary of State Hillary Clinton at a hotel near the United Nations in New York, on Monday evening. While Morsy was not met by his counterpart Barack Obama, the American president does not plan on meeting any other heads of state either during the this week’s United Nations general assembly.

A senior member of the US state department told the press afterwards that it was, “a very relaxed and warm meeting, serious and very professional, but there were moments of good humour as well.”

Discussion of the issue of security was a priority for the state department. Clinton thanked Morsy for Egypt’s defence of the US embassy during recent protests in Cairo but expressed concern for the security situation in Sinai.

Despite recent developments, Egyptian state information service reported that Clinton confirmed aid will still flow to Egypt this year. This aid has been questioned by members of the US government who distrust Egypt, and by Egyptians who want to distance the country from US patronage.

Clinton and Morsy addressed budget reform, while acknowledging the need “to improve the day-to-day lives of Egyptians,” which the US representative called the cause of the last year’s revolution.

The state department official also said that the two delved into “some of the triggers that set off the protest at our Embassy and the violence that occurred in other countries.”

In fact, on Tuesday, Obama addressed the general assembly and spent much of his speech on this topic. He said while hateful speech is despicable, it must also be understood that, “the best response to hateful speech is not repression, it’s more speech.

He went on to say, “Muslims have suffered the most from extremism. Let us condemn the violence against Sufi Muslims, and Shi’a pilgrims.” Obama encouraged the world’s leaders to focus less on those in Egypt inciting violence against Copts, and more on those in Tahrir who chanted for religious unity.

Religious unity also held a prominent place in Morsy’s Tuesday schedule. State news reported that Morsy met with representatives of Islamic, Christian, and Jewish organisations. The meeting was held at the Egyptian mission in New York, “within the framework of boosting dialogue, tolerance and understanding among faiths.”