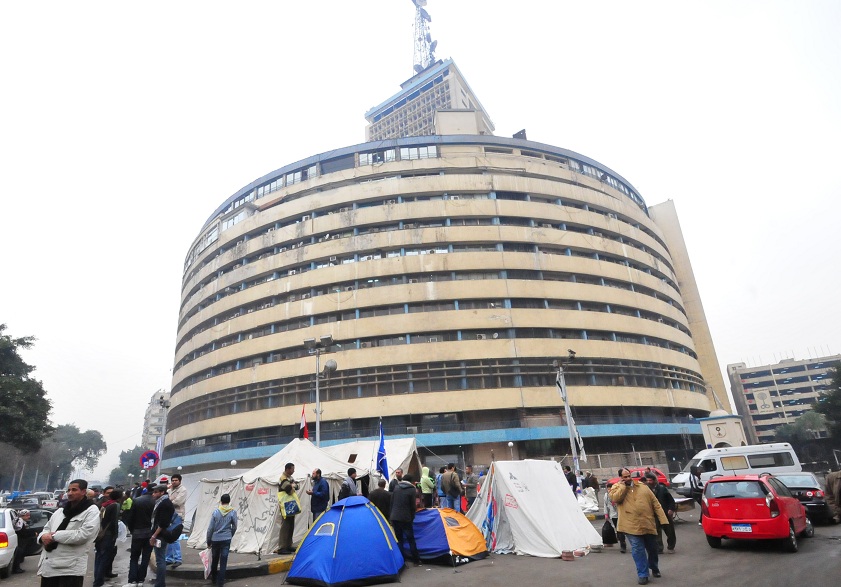 As the first draft of Egypt’s new constitution nears completion, the issue of media and press freedoms is becoming key within political discourse.

Many view the articles proposed by the Constituent Assembly as a setback to press and media freedoms, with the constitution allowing the permanent shut down of newspapers through judicial orders, for example.

Furthermore, the Muslim Brotherhood, now with a lot of influence in the state, has the potential to exert a lot of control over the media, state-owned and private, print, television and radio. This has raised concerns from the opposition as well as journalists and media professionals themselves.

The Egyptian Initiative for Advancement of the Media is a movement set up by media professionals and journalists in order to ensure media freedoms after the 25 January 2011 revolution and the proper reorganisation of state-owned media.

It is calling for the formation of a national media council with representatives from within the industry to regulate television and radio broadcasts, effectively replacing the Ministry of Information.

The media council would be the sole entity concerned with granting broadcast licences and assigning broadcast frequencies. It would also be in charge of renewing said licences or revoking them in case of violations, in addition to levying fines and temporarily suspending broadcasting.

According to the initiative’s spokesperson, media expert Yasser Abdel Aziz, the initiative already formulated a bill and submitted it to the now dissolved lower house of parliament.

“I presented the bill earlier to the People’s Assembly over three sessions before it was dissolved,” he told Daily News Egypt.

Members of the cabinet who expressed interest in the initiative recently contacted Abdel Aziz. He says at least three cabinet ministers have promised to adopt the bill.

“I received a call from the minister of justice, Ahmed Mekki, who said he wanted to see the bill, I was then invited by the Constituent Assembly to present it to them and they promised to include it. I am certain the first draft of the constitution will include an article about the [media] council,” said Abdel Aziz.

If the Constituent Assembly does indeed include the media council in the constitution, it does not mean the initiative’s suggestion will be followed, however.

“President Morsy, who now has legislative powers, could also take initiative and pass a law himself by decree,” he added.

Abdel Aziz said his greatest fear when it comes to the bill is that the bill might not be passed into law or even worse it could be significantly modified in a way that changes the entire meaning or defeats the purpose, which is to ensure media independence.

Composition of the council and concerns over independence

The council would be composed of 13 members, who would serve one non-renewable six-year term and could be removed from office without a court order.

The chairman of the Supreme Council for Communications Management and the journalists’ syndicate board would pick one member each and the final two members would have to be human rights activists known for defending freedom of speech and expression. The National Council for Human Rights would pick them.

Rasha Abdulla, another member of the initiative, says the current composition of the council needs to be amended. She feels the state is overly represented in the current arrangement.

Abdulla, who is an associate professor and former chairperson of the Department of Journalism and Mass Communication at the American University in Cairo, was initially completely opposed to the council formation.

According to Abdulla, the initial draft of the bill had stated that the president would pick three members, the People’s Assembly would pick three, and three members would be religious figures, leaving only three independent media professionals to represent the industry.

“The current draft is much better but I think the president and the People’s Assembly should collectively pick only a third or a quarter of the council’s membership rather than half, it’s all about guaranteeing the independence of the council,” Abdulla told Daily News Egypt.

“My problem with the proposal is that a large portion of the council is appointed by the president and the state in general. I know such a council is formed to last, but we have to take the reality of the [political situation] in the country into consideration,” she added.

Abdel Aziz believes that the state’s representation within the council is currently fair, however. He argues that constitutional authorities such as the presidency and parliament have to be involved in such a council.

“The reason why constitutional authorities like the president and parliament are represented is because the council has sovereign rights like providing licences and broadcast frequencies,” he said.

“Although the state is represented by seven members, the bill still guarantees the council’s independence,” he said, adding that the bill has a provision stating no more than four members of the council in total can be from one political party or group.

Abdulla does not believe this provision is enough, however. She argues that those in power could easily get around it and appoint loyalists who do not necessarily belong to one party.

She likened the situation to that of former President Hosni Mubarak and his National Democratic Party which always maintained a parliamentary majority.

“It would be like Mubarak and the NDP, the same pool of candidates between the president and parliament, with official members and outside members,” she said.

She added that she believes there should be only three members of one political party allowed in the council.

Abdel Aziz again disagreed, arguing that if a certain group is in power and has both the presidency and the parliament then they are the choice of the people.

He added that the model the suggestion follows is international and in fact even more independent than countries with a strong tradition of media freedom.

“A media council with no connection to constitutional authorities does not exist anywhere in the world,” he said. “The composition of the council is more liberal than similar councils in France or the United States. In France the council is composed of nine members, three chosen by the president, three by the lower house of parliament and three by the upper. In the US it’s five members all chosen by the president.”

Abdulla says Egypt cannot be compared to the US or France and that the political realities must be taken into consideration, however.

“We can’t compare the democratic tradition and the parliament in France or the US to that of Egypt, it’s a different context. Egypt is going through a transition, it is vulnerable,” she said, adding “the vast majority [of members] would be Islamists or with Islamic inclinations.”

However, she praised the new draft and said that it only needed a few improvements.

“This is a work in progress, my recommendation would be that the president and People’s Assembly together pick four members only, no religious figures whatsoever, and make space for more media people. Otherwise, the current composition is not a big problem,” said Abdulla.

“I like the fact that there are human rights activists but I don’t think they should be chosen by the National Council for Human Rights which unfortunately is not independent,” she added.

Powers of the council: is suspending broadcast acceptable?

Article 8 of the proposed bill states that the council is the only authority with absolute power over broadcasting in Egypt and can determine the qualifications needed to grant and renew broadcasting licenses.

The council also gets to set “professionalism standards” and codes of ethics for all broadcast media as well as a list of punishments which includes fines between EGP 10,000 and 150,000 as well as suspending broadcast for a period not exceeding a month and revoking or refusing renewal of broadcast licences for repeat offenders.

“Suspending broadcast is an extremely strong punishment. It should be strictly regulated and restricted or it would otherwise lead to a media disaster,” said Abdullah adding, “I personally cannot think of a case that warrants taking a channel off the air.”

She used the example of talk show host Tawfiq Okasha who currently faces trial on charges of insulting President Mohamed Morsy and inciting murder against him. Okasha’s channel, Al-Faraeen, was also taken off the air by authorities for six months.

“I am personally against Okasha but there are others who work in this channel like technicians or sound engineers. Take the individual off the screen,” she said.

She added that there are other effective punishments such as exponential fines.

Abdel Aziz argues that suspending broadcast is a measure that most media council in democratic countries sometimes resort to. He cited the British Office of Communications (OFCOM) and said it had the right to suspend broadcast as it did in the case of the Iranian Press TV channel.

Abdel Aziz said that a council for media to govern audio and visual broadcasting was only one of three suggested councils. He said there were another two proposals, one for a press council to govern journalism and another for a national council that would run all state-owned publications, television and radio channels.

The suggestions, which are Abdel Aziz’s own projects, are yet to be adopted by the initiative.

“What I like to do is put my suggestions up for public debate first and seek consensus over them, then I officially propose them,” he said.

The suggestions are part of a United Nations Educational Scientific and Cultural Organisation (UNESCO) campaign to advance the Egyptian media that Abdel Aziz is an advisor to. He plans to convince the initiative to adopt them alongside the audio and visual media council, however.

He said he had already proposed the council for running state-owned media to the Constituent Assembly and that its members had promised to adopt it as well.

The proposed council that manages state media will include three members chosen by the president, three by the People’s Assembly but not from within it, four journalists and media professionals chosen by the press and media syndicates, two members representing civil society and one member who is a State Council judge.

It will take over from the Shura Council, the upper house of parliament, in hiring the chief editors of over 50 state-owned publications and the board chairmen of the eight institutions that run them.

Furthermore, it will also assume the powers of the Ministry of Information in that it will run the Egyptian Radio and Television Union, popularly known as Maspero, which encompasses at least 29 television channels and nine radio stations.

This council, alongside the audio and visual media council would together render the Ministry of Informationunecessary, as they would take over all its duties.

As for journalism, Abdel Aziz wants to replace the Supreme Council of Journalism, which is hired by the Shura Council, with another press council that is largely composed of journalists.

He argues that journalism, unlike other media fields in Egypt, has a strong history and tradition of self-management as well as a strong syndicate.

The council would include two publishers, two chief editors, three journalists chosen by the journalists’ syndicate, two human rights activist, and a judge from the Supreme Judicial Council.

A press conference is scheduled at the journalists’ syndicate on 4 October to propose the idea to journalists.

All of these proposals, however, are contingent upon the Constituent Assembly having the political will to guarantee press and media freedoms in the next constitution.

On 24 September, Constituent Assembly spokesperson, Wahid Abdel Meguid, sent a strongly worded complaint to the assembly’s drafting committee over its editing of the press related articles. The new article on journalism, for example, allows for the shutting down of entire newspaper as long as there is a judicial order.