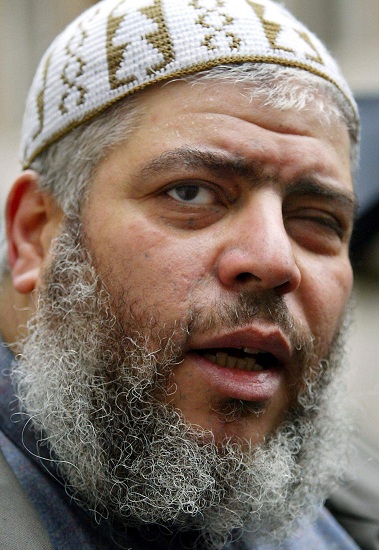 Five men wanted on terrorism charges in the United States, including Egyptian born Abu Hamza Al-Masri and Adel Abdul Bary, had their final appeal against their extradition from the United Kingdom rejected by the European Court of Human Rights (ECHR) on Monday. The men argued that extradition to the US would mean they would be subject to, “torture or inhuman treatment or punishment,” which would conflict with the European human rights policy, AP reported.

Al-Masri was born in Alexandria and moved to Britain in 1979 where he studied civil engineering.  He also fought alongside Bosnian Muslims in the early 1990s in the Bosnian War. He became famous in Britain for the anti-western and anti-semitic views he aired during his time as the imam of the Finsbury Park mosque in London, which was closed in 2003 as a result of his hatred fueling rhetoric.

In 2006, he was jailed for seven years in the UK on charges of inciting hatred and is still serving that sentence.  He is known for his distinctive look, having lost a hand and an eye following an explosion. According to AP, he claims that he no longer has Egyptian nationality, although British authorities still consider him Egyptian.

Abdul Bary came to the UK as an asylum seeker and was arrested in 1998 with Ibrahim Hussein Abdel Hadi Eidarous, another Egyptian who since died. According to a profile of the men facing extradition, the men were arrested in relation to two bombings on US embassies in Kenya and Tanzania.

A Saudi man, Khaled al-Fawwaz was arrested for the same reason and is another of the five men facing extradition to the US. The Telegraph also states that Abdul Bary was connected with Ayman al-Zawahiri, Osama bin Laden’s second in command and now leader of Al-Qaeda. Abdul Bary was sentenced to death in absentia in Egypt for plotting to attack to the Khan Al-Khalili market in Cairo in 1995. He has remained in custody in the UK since 1999.

Both the UK and US welcomed the ruling from the European court. Following the ruling, the UK home office told AP, “we will work to ensure that the individuals are handed over to the US authorities as quickly as possible.”

Babar Ahmad and Syed Talha Ahsan, both British citizens, are also expected to be extradited. Ahmad has been in custody without charge since 2004 and some of his supporters have fought for him to face trial in Britain because that is where his alleged offence took place, according to AP.

The decision ends a long legal battle between the five men and UK authorities. Taking their case to the ECHR was their final avenue of appeal.

The five men could be transferred to US custody in a matter of weeks.