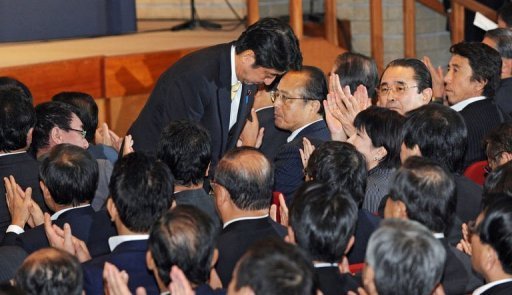 The hawkish conservative, who was Japan’s youngest ever prime minister during his year-long stint, comfortably beat his rival in a run off for the job of president of the Liberal Democratic Party (LDP).

Abe, 58, who quit as prime minister in September 2007 after 12 months in the job, pledged to work with lawmakers and get the LDP back into government, three years after it was booted from office.

“Not only for ourselves, not only for the LDP but for the purpose of building a strong Japan, a prosperous Japan, and a Japan in which Japanese people will be able to feel happy about being Japanese,” he said.

The once-ineluctable LDP fell from grace in 2009 after more than half-a-century of almost unbroken rule, displaced by party malcontents who had split off to form the Democratic Party of Japan.

But the DPJ of Prime Minister Yoshihiko Noda has largely disappointed, and looks set for a drubbing in national polls, which must be held within a year but could come any time.

Despite the LDP not being desperately popular either, the party appears set to be the main beneficiary of Noda’s woes and is expected to have the largest presence when the dust settles, thrusting Abe into the limelight as the man who must forge a coalition.

His victory on Wednesday could have far-reaching implications, not least for Japan’s increasingly spiky relationship with its neighbours amid escalating territorial disputes.

He has stressed the importance of a closer military alliance with the United States. In a speech Tuesday, he spoke of the need to stand up to Beijing, a common theme in a party campaign dominated by relations with Japan’s giant neighbour.

But on Wednesday, he struck a more moderate note.

He said Japan under him would “steadfastly defend” the Senkaku islands, which China calls Diaoyu, but stressed the mutual importance of the relationship between the two countries.

“I chose China as the destination of my first overseas visit when I assumed the premiership six years ago. That was because Japan-China relations are extremely important,” he told a press conference.

“Japan reaps profits by investing in China and exporting to China. China’s growth is necessary for Japan’s growth, at the same time, China creates jobs with the help of Japanese investment.

“And even if national interests clash, I think we shall control the situation by strategically weighing the recognition that the two countries need each other.”

Mikitaka Masuyama, of Japan’s National Graduate Institute for Policy Studies, said Abe the premier-in-waiting may behave very differently from the man who was trying to persuade fellow conservatives to let him steer the ship.

“Despite his hawkish beliefs, it is likely he will pursue moderate policies once he assumes a responsible post,” he said.

But Tetsuo Kotani, a fellow at the Japan Institute of International Affairs, said Abe was anathema to Beijing.

“China has been loathe to see Abe as president of the LDP,” he said.

“Now there are two possible courses of action for Beijing: One is to seek a compromise with Noda’s DPJ-led government in a bid to fetter Abe in his policy options.

“The other is to seek a compromise with the LDP, probably sending secret envoys to meet LDP heavyweights, while treating Noda as a lame duck. But this option is also aimed at fettering Abe,” he said.

“The major risk for Abe is history issues,” said Kotani, adding if he makes any attempt to revise Japan’s 1993 apology over the Japanese military’s use of sex slaves during the World War II, “China and South Korea will confront him”.

Domestically, already-stagnant Japanese politics may stultify further under an Abe-led LDP, said Masuyama, because he is less likely to power his party to victory than one of his more voter-friendly opponents would have been.

“If neither the LDP nor the DPJ can secure a majority in the lower house, that would further complicate an already strained political scene where the government does not have control of the upper house,” he said.