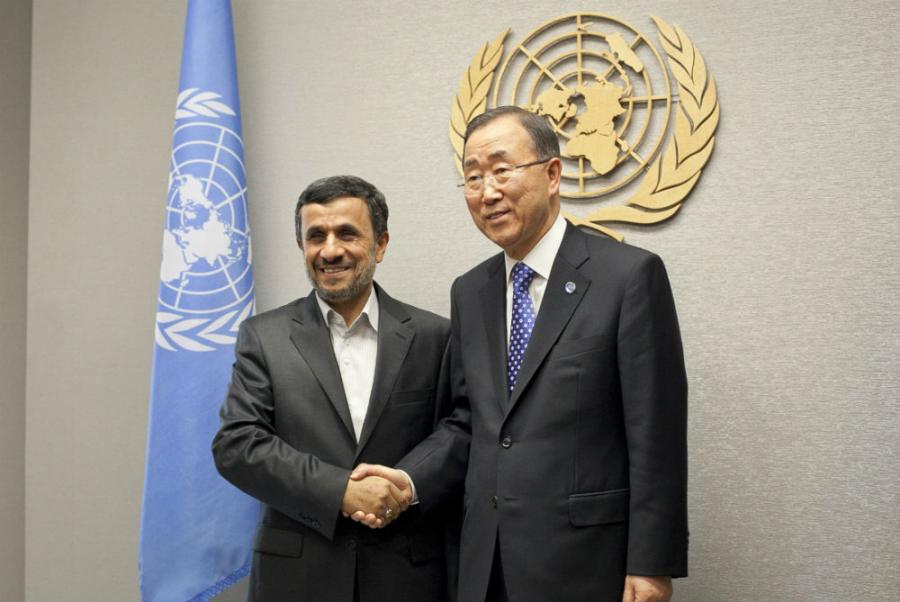 Tehran (AFP)- Iran’s oil-dependent economy was showing the strain of punishing Western sanctions on Tuesday, on the eve of a speech by President Mahmoud Ahmadinejad to the UN General Assembly in New York.

The Iranian currency dived around four percent close to an all-time low against the dollar, while thousands of workers publicly complained of unpaid wages, importers struggled to pay for goods, inflation climbed and travel agencies bemoaned a rapidly shrinking pool of travellers able to afford to go abroad.

Government initiatives to maintain the value of the rial and the volume of oil exports have failed, with both halved from their levels of a year ago.

Iran’s leaders, though, are defiant in the face of the Western pressure, vowing to never roll back its nuclear programme as demanded by the five permanent UN Security Council members plus Germany.

Ahmadinejad was expected to stress that defiance in a speech to the annual General Assembly on Wednesday.

Supreme leader Ayatollah Ali Khamenei has already ordered Iran to adopt an “economy of resistance,” while officials have told national media to avoid reporting on the “bleak” domestic situation and instead emphasise positive economic stories.

Evidence of the difficulties still surfaced, though, driven by an EU embargo on Iranian oil and US sanctions on financial transactions involving Iran’s central bank.

A prominent MP, Mohammad Reza Bahonar, was quoted at the weekend by the ISNA news agency as saying oil exports in June-July had dropped to “around 800,000 barrels per day” — a low not seen in more than two decades, and less than half the 2.3 million barrels per day of a year ago.

Bahonar’s oil export figures roughly tallied with those given by OPEC and the International Energy Agency.

But Oil Minister RostamQasemi was quoted by ISNA saying that overall oil production this year “will be the same as last year.”

Ahmadinejad early this month also admitted Iran faced “problems” selling its oil, which accounts for nearly half of budget revenues. But he insisted his country would manage. Both he and Khamenei have urged lesser economic dependence on oil sales.

Iran’s government and ordinary citizens alike were struggling with the sanctions, with food costs notably soaring.

The ILNA news agency reported that a letter on behalf of 20,000 workers from across the country was sent to Labour Minister AbdolrezaSheikholeslami complaining they had not been paid and demanding an increase to their salaries of $120 to $285 a month that they said were “way below the poverty line.”

Better-off Iranians were cutting back on travel because of the sharply weakened Rial.

“Iranians who would have travelled abroad are more likely to go to domestic destinations like Kish or Mashhad,” an employee in a small independent Tehran travel agency who gave her first name as Pantea said.

“Many Iranians who used to go on domestic trips simply can’t afford it now.”

Tour companies trying to fill half-empty flights in the middle of the week to Turkey have taken to trying to sell last-minute flights for as little as $60 return via mass text messages.

A lighting equipment seller in Tehran who gave his first name as Saeed said he was used to importing six shipping containers of goods from China per year, but this year he imported just one.

“I am waiting to what happens to the market and dollar situation,” he said. “If these circumstances persist, I may have to close down.”

Iranian officials are increasingly focusing on the problems.

“According to the statistics, there is a strong rise in unemployment, and we need to find a solution. Official statistics also show inflation is at 22 percent, which is very high, and in some areas it’s even higher,” parliamentary speaker Ali Larijani was quoted as saying by ISNA.

The US Treasury official tasked with deploying US sanctions, Under Secretary for Terrorism and Financial Intelligence David Cohen, two weeks ago gave a speech to a law school at New York University in which he said: “Put simply, Iran?s economy is struggling.”

He said that was because of the sanctions — and also “the Iranian government? continued gross mismanagement of its domestic economy.”

He said the slump in oil exports was costing Iran “up to $5 billion a month, forcing the Iranian government to cut its budget because of a lack of revenue.”

Cohen said that, as long as Iran refused to negotiate curbs on its nuclear activities, “we will continue to devise new and enhanced sanctions.”

Britain, France and Germany are also urging their European Union partners “to further step up the pressure” on Iran. Further sanctions targeting the Islamic republic’s energy, finance, trade and transportation sectors are expected to be formally adopted on October 15.