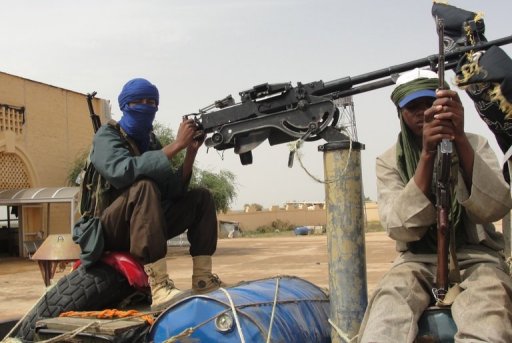 GAO, Mali (AFP) — With his finger on the trigger and a menacing look, a 14-year-old recruit ordered a vehicle to pull over on the road from the Niger border to Gao, the biggest city in northern Mali, now under control of Islamist armed groups.

“We have decided to reinforce security here and take the necessary steps to do so,” Malian teenager Aziz Maiga told AFP at this checkpoint in Labezanga, about 200 kilometres (125 miles) from Gao, before he joined in a search of the waiting vehicles.

The rifle-toting Islamist fighters, wearing turbans and military uniforms or fatigues and dusty black combat boots, inspected all the passengers and their baggage.

Perhaps the most startling thing about these fighters along this frontier route is that nearly all of them are from sub-Saharan Africa rather than the Maghreb.

“Me too, I am surprised,” Nigerien Hicham Bilal, who is leading a katiba (combat unit) to Gao, admitted to AFP. “Every day we have new volunteers. They come from Togo, Benin, Niger, Guinea, Senegal, Algeria and elsewhere.”

Since all of them want to go to war, Bilal said, the fighters are no longer divided into separate Islamist movements.

“We are all mujahedeen,” he declared. “Here, there’s no more MUJAO (Movement for Oneness and Jihad in West Africa), Ansar Dine (Defenders of the Faith) or AQIM (Al-Qaeda in the Islamic Maghreb).”

A young Ivorian, clearly a new recruit, boasted: “We are ready for battle. We are waiting for the French or African troops to arrive.”

His battle cry referred to a military force that West African nations are planning to deploy in Mali, with logistical aid from France, to help Bamako take back control of the north which was seized by Islamist groups following a March coup. The deployment is awaiting authorisation from the United Nations.

In Gao, the new arrivals present themselves at the Islamist police headquarters. The fresh fighters showing up there appear younger and younger.

“I am Khalil, an Egyptian, and I came to help my mujahedeen brothers,” said one man in Arabic, speaking through a translator from Sierra Leone.

Another volunteer said in English that he is Pakistani. “Islam has no borders,” he added.

While these two work with the police, several dozen Algerian fighters have taken up positions on the frontline to the south of the city on the road that leads to the Malian capital Bamako.

According to one witness, the Algerians are part of the combat unit of powerful AQIM chief Mokhtar Belmokhtar, alias Belaaouar, who controls the Gao region.

At Gao’s airport, the Islamists have parked broken-down vehicles on the runways to prevent “enemy” planes from landing there.

Residents near the airport claim there are two training camps for new fighters.

“I saw some of them training. There were two sessions on shooting and military tactics. A lot of them are very young, they say they are ready to die,” said a civil servant in Gao, who requested anonymity.

Around the nine districts in the city of Gao, locals say “camouflaged” fighters are setting up in the houses.

“I saw two heavy weapons in one house in the fourth district of Gao. It’s the first time I’ve seen that,” said one young resident named Djenakou.

Life for the citizens of Gao has become harder after the Islamists recently imposed strict sharia law in the region. On September 10, five men accused of robbery each had a hand and foot cut off.

Around the city, private radio stations can no longer play music. Women must wear a veil or face punishment including being sent to prison. And it is rare to see someone dare to smoke in public.

To discreetly buy tobacco, people use a code name: “paracetamol”.

One man complained that everyone in his village of Bamba is out of work “because Bamba is the main area for growing tobacco, which is now banned from being sold.”

The Islamists, who were tolerated by the local population when they first took control, appear to have become more and more unpopular. Still, the city market is bustling with people and basic foodstuffs can be found in the stalls.

And the shoppers say they are opposed to any military intervention by foreign troops.

“When elephants fight each other, it’s the grass that suffers. The elephants are the (Islamist) fighters here and the army from Bamako with outside support. The grass is the poor civilians, us,” lamented Mahamane, a retired civil servant.