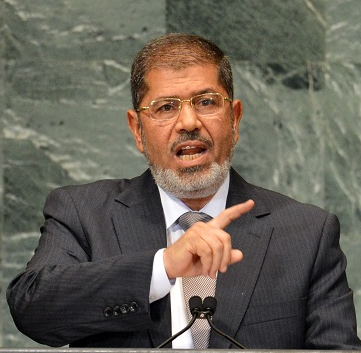 Egyptian President Mohamed Morsy addressed the General Assembly of the United Nations at its 67th session on Wednesday in a speech that encompassed a wide range of issues.

Egypt’s first civilian democratically elected president proclaimed a new era for his country. “Post-revolution Egypt, having freed itself from the contradictions of a bygone era, is among the leading nations defending justice, truth, freedom, and dignity,” he said.

“The New Egypt is determined to regain its standing among nations, and assume an effective role in global issues, stemming from the will of its people, as well as the legitimacy on which its regime is founded.”

Morsy presented the Palestinian cause as the first matter that nations should focus on resolving. “It is shameful that the free world accepts, regardless of the justifications provided, that a member of the international community continues to deny the rights of a nation that has been longing for decades for independence.

“It’s also disgraceful that settlement activities continue in the territories of these people, along with the delay in implementing the decisions of international legitimacy.” the president said.

Palestine is currently requesting observer status to the United Nations, faced with the difficulty of obtaining full member status in the assembly.

Morsy discussed the ensuing bloodshed in Syria and the quartet consisting of Egypt, Iran, Turkey, and Saudi Arabia. “I would like to emphasise that the initiative is open to all those who wish to positively contribute in resolving the Syrian crisis,” he added.

The president also stressed the strategic importance of Sudan and the significance of helping it achieve stability and development.

During a time when anxiety surrounding Iran’s nuclear programme has escalated, and Tehran and Israel continue to issue threats, Morsy underscored that the Nuclear Non-Proliferation Treaty be applied with the same standards for every country.

“The only solution is to get rid of nuclear weapons, and all weapons of mass destruction,” he said. The president insisted that nuclear energy be used for only peaceful purposes.
Morsy also spoke of the importance of women and youth issues, proposing a UN body designated to deal with the youth, focusing on education, training, employment, and encouraging participation in politics.

The president responded to incidents over the past weeks in which the prophet Muhammad and the religion of Islam had been insulted. “What Muslims and migrants are going through… is unacceptable,” he said. “These practices have become pervasive enough that they now carry a name: Islamophobia.”

He closed by promising to the UN that Egypt would become a prominent player in global politics, promoting “cooperation and engagement with all members of its organisation.”

Presidential spokesman Yasser Ali told the state information service that Morsy has been meeting with many heads of state in New York. He met with Sheikh Hasina of Bangladesh and Hamad Bin Khalifa Al-Thani of Qatar, in addition to discussing Mubarak’s funds with the British prime minister and receiving an invitation to France from its president.

He also spoke at Bill Clinton’s Clinton Global Initiative. He spoke in English and started with a few jokes. He went on to say “we face many challenges, but also have great opportunities. We have the potential, we have the resources, but we have been lacking the system and have been suffering from corruption.”