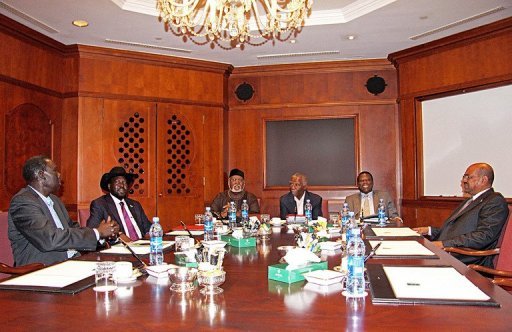 ADDIS ABABA (AFP) — Sudan and South Sudan leaders are edging close to signing a deal on festering disputes between the rival neighbours on the fourth day of a presidential summit, Ethiopian officials said Wednesday.

“The final result of the negotiation between the two Sudans is expected to be made public by a press conference,” Ethiopia’s foreign ministry said in a statement.

However, diplomats suggested the former civil war foes were close to reaching a partial agreement, not a comprehensive deal as had been hoped.

The press conference is scheduled for 1030 GMT but there was no confirmation from either delegation a deal would be signed then.

President Omar al-Bashir of Sudan and his Southern counterpart Salva Kiir began talks Sunday — in what was originally billed as a one-day meeting — with sticking points reported to be contested border regions and security issues.

Efforts had been made to strike a comprehensive deal tackling multiple issues including oil, security, a demilitarised border buffer zone and contested regions, but it is understood any deal signed Wednesday would be partial.

“There has been progress, not on all areas, but if a deal can be reached, it is a good step forward,” a Western diplomat said.

Amid international pressure to reach a deal — after missing a UN Security Council deadline to settle by Saturday — teams from each side have spent days locked in efforts to narrow positions, as mediators shuttled between them.

The protracted talks under AU mediation began in the Ethiopian capital several months before South Sudan split in July 2011 from what was Africa’s biggest nation, following an independence vote after decades of war.

Key issues include the ownership of contested regions along their frontier, especially the flashpoint Abyei region, and the setting up of a demilitarised border zone after fierce clashes.

A comprehensive deal — as opposed to another stepping-stone agreement — would have to include a settlement on Abyei, a Lebanon-sized border area currently controlled by Ethiopian peacekeepers.

The buffer zone would also potentially cut support for rebel forces in Sudan’s Southern Kordofan and Blue Nile regions that Khartoum accuses Juba of backing, just as the South accuses Sudan of arming rebels in its territory.

The UN set a deadline for a deal after border fighting broke out in March, when Southern troops briefly wrested the valuable Heglig oil field from Khartoum’s control, and Sudan launched bombing raids in response.

But even among the most optimistic diplomats, there seemed little chance of a breakthrough to solve the growing humanitarian crises in Sudan’s civil war states of Southern Kordofan and Blue Nile.

However, it was hoped the deal would also settle the details of last month’s agreement to fix the oil export fees that landlocked South Sudan will pay to ship crude through Khartoum’s pipelines to the Red Sea.

At independence, Juba took two-thirds of the region’s oil, but processing and export facilities remained in Sudan. In January, the South shut off oil production after accusing Sudan of stealing its oil.