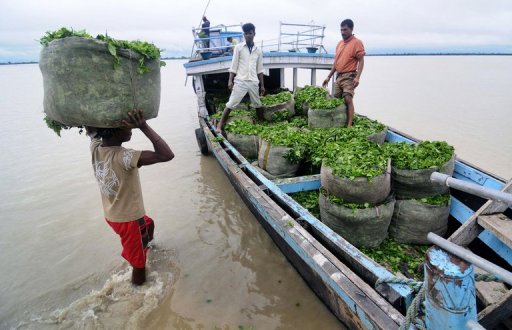 Disaster management chiefs overseeing the aid effort in Assam state also said the number of people killed in flood-related incidents had reached 18 with five more such casualties reported in the last 24 hours.

It is the third time this year that the region has been hit by mass flooding.

Families stranded by the flood waters said they were close to starvation because the few relief packages that had been flown in were not enough to go round.

The defence ministry said heavy-lift helicopters were conducting up to 10 air drops a day, each containing up to 1.5 tonnes of food, medicine and aid material.

But it admitted the relief operation was struggling because there was no let-up in the weather during what is the back-end of the monsoon season.

Phogat said he was unable to put a figure on the number of people rescued so far from their homes.

“Our priority right now is to rescue trapped people and reach food and medicines to those affected,” he told AFP.

Mother-of-three Rupamoni Payeng said it was the third time this year she had fled to an elevated section of land on the submerged island of Majuli to escape flooding.

“We had to come here in June and August,” she told AFP by phone, huddled inside a tarpaulin tent with the rest of her family.

She said the mood among other flood victims on the island, which is around 350 kilometres (220 miles) from Guwahati, was getting desperate.

“We have not got any relief supplies from the government and are almost starving,” she said.

“Some food packets were dropped by helicopters, but there was a mad scramble and only a few managed to collect.”

The latest bulletin from Assam’s disaster management department said the number forced to flee their homes had risen to two million, up by around 200,000 on the previous figure.

“This is a preliminary estimate and details can be established only after the floods recedes,” Assam agriculture minister Nilomoni Sen Deka told AFP.

The remote state, rocked by ethnic violence last month, has been flooded three times in the last four months by the Brahmaputra River.

Assam’s worst floods in recent years came in 2004 when 200 people were killed and five million people forced to flee their homes.

Rain is continuing to also pound adjoining Arunachal Pradesh state, where the Brahmaputra flows into India from its starting point in bordering Tibet.

Wildlife has been affected with the floodwaters submerging the 430-square-kilometre (166-square-mile) Kaziranga National Park in eastern Assam, home to the world’s largest concentration of endangered one-horned rhinos.

Authorities have asked truckers and other drivers on a nearby national highway to drive at less than 40 kilometres (25 miles) an hour to reduce the risks for wildlife fleeing the floods.

Flooding from the Brahmaputra has also hit parts of neighbouring Bangladesh, where officials say nearly 250,000 people have been trapped by the rising waters.

In Kurigram district, which borders Assam, more than 200,000 people have been trapped in their homes, district administrator Habibur Rahman told AFP.

“The flood situation is worsening, with the Brahmaputra rising more than a foot (25 centimetres) in the last 24 hours. We’ve geared up relief for the flood-affected people,” he said.