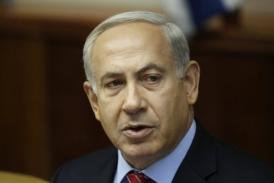 AFP-UNITED NATIONS — Israel’s Prime Minister Benjamin Netanyahu came to the United Nations on Thursday to declare the “clear red line” that Iran’s nuclear drive must not cross if it is to avoid attack.

Netanyahu was to address the UN General Assembly in New York shortly after Palestinian leader Mahmud Abbas, but was expected to overshadow his rival at a summit dominated by talk of war in Syria and tension with Iran.

“In his speech, the prime minister will set a clear red line,” a senior Israeli official told reporters traveling with Netanyahu, referring to the trigger that could dramatically escalate the confrontation with Tehran.

Western powers share Israel’s fear that Iran is on the brink of developing a nuclear weapon that could dramatically tip the balance of power in an already volatile Middle East and set off a regional atomic arms race.

But they have resisted calls to define publicly a threshold at which Iran’s uranium enrichment and alleged weapons research would become intolerable, preferring to apply pressure through economic and diplomatic sanctions.

This week, however, US President Barack Obama, in his own General Assembly address, came closer than ever to the Israeli position, declaring that the United States would “do what we must” to prevent Iran getting the bomb.

Iran’s Mahmoud Ahmadinejad was defiant at the summit, accusing the West and Israel of “nuclear intimidation” and dismissing both economic sanctions and the threats of “uncultured Zionists” as irrelevant to his nation.

Several world leaders in New York, including UN Secretary General Ban Ki-moon, warned against threats of war, but the Israelis seem confident their position is at least in line with Obama’s tough stance.

“Obama said that Iran will not have nuclear weapons. Netanyahu will clarify the way to prevent Iran from having nuclear weapons,” the official said. “What he will say regarding red lines will help ensure this goal will be achieved.

“Netanyahu is convinced that the US and Israel can work together to achieve this common goal,” he added.

Addressing the General Assembly on Tuesday, Obama made clear that Washington would not tolerate a nuclear-armed Iran, which Israel has said would pose an existential threat to the Jewish state.

“Make no mistake. A nuclear-armed Iran is not a challenge that can be contained. It would threaten the elimination of Israel, the security of Gulf nations, and the stability of the global economy,” Obama said.

Meanwhile, Abbas, a year after making an historic appeal for UN recognition of Palestinian statehood in the absence of peace talks that last collapsed in 2010, is expected to return to the assembly with a more modest goal.

“We want Palestine back on the map, on the 1967 lines, with east Jerusalem as its capital, carried by 150 to 170 nations,” Palestinian negotiator Saeb Erakat told journalists last week.

The Palestinians see this as the basis for border negotiations with Israel on a permanent solution to their conflict, but Israel and the United States oppose any recognition before the terms of a final deal are agreed.

The Palestinian leadership was formerly opposed to non-state membership, seeing this as a distraction and possible dead end, but their political clout has diminished in the year since their initial bid.

Enhanced observer status would at least give them access to more agencies, such as the World Health Organization or International Criminal Court.

If it were to come to a vote, the Palestinians would probably win a majority of UN members, but they have reportedly promised Washington not to push the issue too hard until after the November 6 US presidential election.

The UN General Assembly was also hearing from Myanmar leader Thein Sein, who has presided over historic reforms after decades of military rule, leading to rapidly thawing relations with the West.