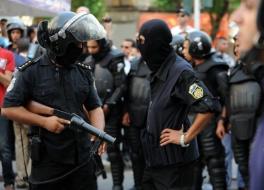 (AFP) – TUNIS — Tunisia’s Islamist-led government is “morally and politically” responsible for police attacks against women, the lawyer for a young women allegedly raped by two policeman and charged with indecency said on Thursday.

“It has a political and moral responsibility,” Bouchra Belhaj Hamida told AFP.

Police violence “is not organised, but the language of the (Ennahda) party on women has paved the way for it,” she added.

“Since October (when the Islamists were elected to power), there have been many cases of moral, sexual and financial harassment by the police. When they see a modern woman, a Tunisian woman, they reckon they have the right to hold them to account” for their behaviour, Hamida said.

“Women victims (of harassment) are then condemned.”

“There is a feeling of impunity among the police,” the lawyer charged.

“It is too soon to say whether this case will change things… (but) there is the ever-present question of police reform, and it must be decided on what basis it will take place,” she added.

The interior ministry insists that the police are held to account like everybody else when they commit crimes.

Hamida’s client, who was allegedly raped on September 3, is accused along with her fiance of “indecency” by the policemen, the couple having been taken by surprise in an “immoral position,” according to the ministry.

Three police officers — the two alleged rapists and another accused of holding down the women’s fiance while she was raped — are in jail awaiting trial.

The interior ministry has said this was isolated case and urged people and called on people on Thursday “not to exploit this affair politically or in the media.”

The woman herself appeared in court on Wednesday charged with indecency, and her lawyer confirmed that she came face to face with the police accused.

“It went well,” she said, adding that she could not say any more because the investigation was ongoing.

The hearing was adjourned until Tuesday, when the couple must once again appear before the magistrate who “will question them, and it would be nice to see the case closed without further ado,” the lawyer said.

If found guilty of indecency, the couple could be jailed for six months.

The young women, who does not want her identity revealed, gave an account of her ordeal in Tunisian daily Al-Chourouk, saying the police had also tried to get money from her fiance.

“I never believed that I would be summoned to court accused of wrongdoing. I thought I was the victim, not the accused,” she told the paper.

“I will not renounce (my accusation) after being humiliated in this way,” she said, while denying that she had been in a compromising position with her boy friend in the car when the police arrived.

“It is not true. When they came, I was dressed,” she insisted.

Since the Islamists’ rise to power after last year’s revolution, feminist groups have accused police of regularly harassing women, by challenging them over their clothing or if they go out at night unaccompanied by family members.

Ennahda also provoked a storm of protest for proposing an article in the new constitution, since dropped, that referred to the “complementarity” of men to women rather than their equality.

Many saw that as a ploy by the Islamists to reverse the principle of gender equality that made Tunisia a beacon of modernity in the Arab world when it was introduced six decades ago.