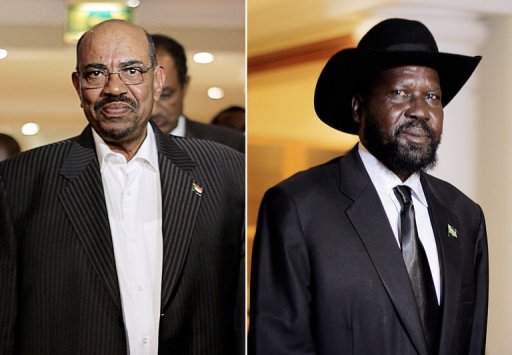 AFP- ADDIS ABABA — Sudan and South Sudan inked a series of deals on security and cooperation on Thursday, hailed by their presidents as ending the rivals’ conflict but falling short of a comprehensive solution.

South Sudan’s President Salva Kiir said the agreement “brings to an end the long conflict between our two countries,” while his counterpart Omar al-Bashir said he would “seize the historic opportunity and journey towards building peace.”

The leaders signed a “cooperation agreement” after marathon talks in the Ethiopian capital that began Sunday, a day after the rivals missed a UN Security Council deadline to reach an agreement.

However, the former civil war foes — who came close to renewed all-out war earlier this year — failed to strike a deal on the flashpoint region of Abyei as well as other contested border areas.

The breakthrough agreement was reached late Wednesday, including agreements that built on an oil deal last month, to ensure the resumption of oil exports after a stoppage that has crippled the economies of both nations.

It also included progress on a financial package of some $3 billion that Juba has offered Khartoum, in recompense for Sudan’s loss of key oil fields when the South broke free in 2011 — although exact details were not immediately released.

The deals signed include a key agreement on a demilitarised border buffer zone, where troops must withdraw 10 kilometres (six miles) from the de facto line of control along the undemarcated frontier.

The buffer zone is also designed to cut support for rebel forces in Sudan’s Southern Kordofan and Blue Nile regions that Khartoum accuses Juba of backing, just as the South accuses Sudan of arming rebels in its territory.

The protracted talks under African Union mediation began in Addis Ababa several months before South Sudan split in July 2011 from what was Africa’s biggest nation, following an independence vote after decades of war.

But recent mounting international pressure brought the long-running talks to a head, with teams spending the last few days and nights in frantic efforts trying to narrow positions, with mediators shuttling between them.

The UN set a deadline for a deal after border fighting broke out in March, when Southern troops briefly wrested the valuable Heglig oil field from Khartoum’s control and Sudan launched bombing raids in response.

The talks — originally billed as a one-day summit — had aimed to provide a comprehensive solution to the full range of festering disputes that took the rivals back to the brink of war.

However, the future of the contested flashpoint border region of Abyei — a Lebanon-sized border area currently controlled by Ethiopian peacekeepers — was a key sticking point.

Kiir blamed his “brother Bashir” for the failure to reach a deal on Abyei, saying Bashir had rejected an AU proposal on the area “in its totality”, but Bashir said he was committed to finding a solution.

“We will continue with the same spirit to seek solutions for the remaining and pending unresolved issues, namely the issue of Abyei,” Bashir said, after warmly shaking the hand of Kiir to loud applause.

“We are committed to honouring what we have signed… for the mutual peace and stability of both peoples,” he added, speaking in Arabic.

“We are convinced that what has happened constitutes a giant step forward for both Sudan and South Sudan,” he said.

“What this agreement says is that the governments are committed for no more war.”

Outstanding issues will be addressed during future rounds of talks, officials have said.

However, the agreement also made no progress on violence and a growing humanitarian crisis in Sudan’s Southern Kordofan and Blue Nile states.

Although not part of the direct talks, the two states are a source of bitterness between Khartoum and Juba, with Sudan claiming the South still backs its former civil war comrades who are rebelling there.

Oxfam said that while the agreements were “encouraging steps forward” the lack of solution for the crisis regions was a major concern. The aid organisation also warned that paper agreements must be followed up by implementation on the ground.

“The two nations will continue to face an uncertain future until there is agreement on Abyei and the other contested areas, and efforts stepped up to resolve the conflicts in Southern Kordofan and Blue Nile,” it said in a statement.