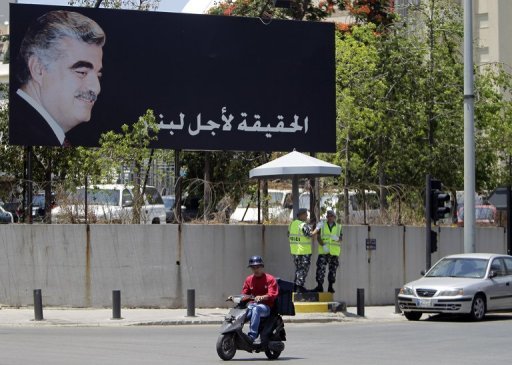 Lawyers also lambasted prosecutors before the Special Tribunal for Lebanon (STL) for delays in handing over evidence they needed for the trial in absentia of four Hezbollah members accused of involvement with the massive bombing.

“The defence respectfully requests… that the judge order the Lebanese government to search for, identify and provide the material sought,” said lawyers for Assad Sabra, one of the accused in a court document.

Beirut should “comply with the judge’s order no more than four weeks” after the ruling, Sabra’s lawyers added in the paper, made public by the court based in the leafy suburb of Leidschendam just outside The Hague.

Sabra’s defence has written “multiple letters” to ask Beirut for help and although the Lebanese government responded, defence lawyers have not received any information to help their case.

“The Lebanese authorities have thus far given only a pretence of cooperation by acknowledging receipt of requests or seemingly addressing some, but no actual cooperation,” his lawyers said in the document.

Information requested included Sabra’s “last known whereabouts including any information that he may still be alive”.

Hariri, a billionaire Sunni Muslim politician, was killed on February 14, 2005 in a massive car bombing on the Beirut seafront along with another 22 people, including a suicide bomber.

The STL announced in July that the trial of four Hezbollah members would provisionally start on March 25 next year, even though the defendants are still at large.

Warrants have been issued against Salim Ayyash, 48, Mustafa Badreddine, 51, Hussein Anaissi 38, and Assad Sabra, 35, but Hezbollah leader Hassan Nasrallah has said the STL is a US-Israeli conspiracy and vowed none of the suspects would be arrested.

Badreddine is accused of being the “brains” behind the attack while Ayyash allegedly coordinated the team.

Anaissi and Sabra allegedly made a videotape pretending another group had claimed responsibility for the attack, then sent the tape to Arab television network Al-Jazeera.

“You must intervene please and order the prosecution to disclose these reports,” in a timely fashion, said one of Ayyash’s lawyers, Eugene O’Sullivan.

“We are doing our best, your Honour,” regarding the reports, prosecutor Gregory Townsend told the judge.

The STL is the only international court that has a mandate to try suspects in absentia and was created by a 2007 UN Security Council resolution at Lebanon’s request.

Hezbollah denies involvement in the spectacular bombing that killed Hariri and was initially blamed on Syria. International outcry in the wake of the murder led to the withdrawal of Syrian troops from its smaller neighbour.

Regional turbulence including the uprising against President Bashar al-Assad’s regime in Syria and the threat of that violence spilling over into Lebanon have led many to question the court’s relevancy today.