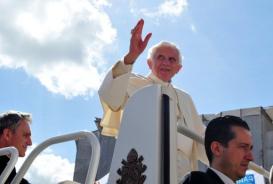 A once loyal servant who said he grew disgusted by the “evil and corruption” he witnessed, Gabriele told investigators he was acting as an “agent” of the Holy Spirit to help the pope put a weary Catholic Church back on track.

Gabriele was in court Saturday for the start of a closely-watched case which could see him receive up to four years in prison for aggravated theft.

The trial, unprecedented in the modern history of the world’s smallest state, has drawn vast media attention and St. Peter’s Square teemed with reporters.

Using the codename “Maria”, he is accused of meeting investigative reporter Gianluigi Nuzzi earlier this year and passing him copies of secret papers.

The trial is unfolding in a 19th-century courtroom tucked away behind the apse of St Peter’s basilica in a corner of the city state that is strictly off-limits to the millions of visitors who visit the Vatican every year.

Television cameras were banned and only 10 journalists are in attendance.

The Vatican has said the 85-year-old German pope is deeply hurt by the betrayal of confidence by someone he “knew, loved and respected”. Gabriele has confessed and has written a letter begging the pope for forgiveness.

Many commentators have said they expect the pope to pardon Gabriele.

But many also question whether he really acted alone or as part of a wider group of disgruntled Vatican employees who could even include high-placed prelates. An investigation into the “Vatileaks” scandal is ongoing.

Gabriele has spent his entire adult life as a Vatican servant, starting out as a cleaner at the Secretariat of State — the main administrative body of the Catholic Church — and becoming butler to the pope in 2006.

He served the pope his meals and clothed him and is a constant presence in official photographs, adjusting the pope’s cloak, holding his umbrella or riding with him on the “popemobile” through crowds on foreign trips.

The leaked letters offer an extraordinary glimpse into the inner workings of the Holy See. It includes letters from a former head of the Vatican governorate alleging he was forced out of his post for tackling widespread fraud.

The scandal has been an embarrassment for the Vatican, though more for the apparent ease with which sensitive papers clearly intended to be read only by the pope and a few confidants could be leaked, than for their content.

Vatican gendarmes arrested Gabriele on May 23 and raided his home behind the Vatican walls, finding copies of confidential documents and gifts intended for the pope including a gold nugget and a 100,000-euro ($129,000) cheque.

Gabriele, one of only 594 citizens of the Vatican, was well known and generally liked in the tight-knit community that inhabits the historic city, but there were also voices of criticism cited in court documents.

“He was very closed,” one of the pope’s four housekeepers was quoted as saying by investigators. “He always seemed to be competitive and seeking approval for his behaviour. He was judgemental in daily life,” she said.

Vatican police also ordered psychological examinations of Gabriele during his 53 days in custody, which concluded he was “an impressionable subject able to commit a variety of actions that can damage himself and/or others.”

The only recorded interview that Gabriele has given was in February with Gianluigi Nuzzi, the investigative journalist who published the leaks.

Gabriele spoke in the darkness, his voice muffled and his identity hidden.

The butler expressed frustration with a culture of secrecy in the Vatican — from the mysterious disappearance of the daughter of a Vatican employee in 1983 to a quickly hushed-up double murder and suicide by a Swiss guard in 1998.

“There is a kind of omerta against the truth, not so much because of a power struggle but because of fear, because of caution,” Gabriele said in the interview, using the term for the code of silence of the Sicilian mafia.

He told Nuzzi there were “around 20” like-minded people in the Vatican.

“It annoys people when you stick your nose in their dirty laundry,” he said, adding that the leaking of documents was “a gesture of rage” against inaction.

Gabriele said he was aware of the consequences of his actions but said the potential to change something in the Vatican was worth the risk.

“Being a witness to truth means being ready to pay the price,” he said.

Gabriele is being tried together with Claudio Sciarpelletti, a Vatican computer technician who is accused of abetting his crime. Sciarpelletti was not in court, but was represented by his lawyer.