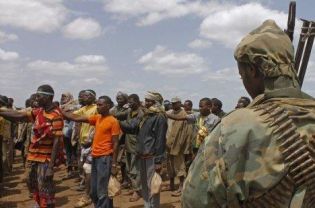 Somalia (AFP) _ Al-Qaeda linked Shebab fighters on Saturday abandoned their last bastion in Somalia, retreating from the port city of Kismayo almost a year after Kenya sent troops to rout the Islamists.

The withdrawal from the southern city that has been a key economic lifeline for the insurgents, came a day after African Union troops launched a major assault to finally dislodge the rebels.

The fall of Kismayo is the latest in a string of major losses of territory for the militia.

Residents confirmed that the Islamist fighters seemed to have moved outside city lines and that their radio station, Radio Andalus, was off the air.

“We don’t know where they went to… but early this morning the last military vehicle left the town,” said Hassan Ali, a resident.

“Even their radio station is off air,” he added.

Shebab fighters on the ground also confirmed what they said was a tactical retreat.

“We got orders from our superiors to withdraw from the city…. This is part of broader military tactics we have set for the enemy,” Sheikh Mohamed Abu-Fatma, a Shebab commander, told AFP by telephone.

The Kenyan army said it would move into the city soon.

“As soon as we consolidate, we will move to take the rest of the city,” Kenya Defence Forces spokesman Cyrus Oguna told AFP.

He said the northern part of Kismayo was under the complete control of the allied forces but as of Friday night “some parts of the south were still under the Shebab.”

Rage said that the Shebab withdrawal was “done in an orderly manner after five years of proper Islamic Sharia law in Kismayo,” and that his troops moved away “to prevent civilian deaths.” The port has been a key source of revenue from exports of charcoal.

Residents said that the withdrawing Shebab bust open the gates of the main prison in Kismayo and the police station.

“Last night they have released the prisoners from the jail and I saw three civilians shot dead by Shebab after accusing them of spying, they left and no one of them is here today,” Abdikarim Hussein, another resident said.

Kismayo has been a vital lifeline for the Shebab since the African Union force in Somalia (AMISOM) reconquered most of Mogadishu last year and Ethiopian troops stripped them of other key cities in the west.

The looming assault on the port city which has been on the cards for the past four weeks has led to the displacement of an estimated 12,000 people who have fled the city. Kismayo’s total population is estimated at between 160,000 and 190,000.

The Shebab seized Kismayo from Somalia’s weak central government in 2008.

The Kenyan military has been aiming to take Kismayo ever since it rolled troops and tanks across the border to fight the Islamist extremists almost a year ago.

The recapture of Kismayo is seen as a major boost to the newly-established central administration in Mogadishu and would pave the way for government troops backed by regional forces to reclaim much of southern Somalia. Observers have consistently said that the loss of Kismayo would leave the Shebab, who once controlled 80 percent of the country, unable to retain large swathes of territory.

The other key Shebab-held towns of Afgoye, Baidoa and the port of Marka have all fallen in recent months.

But in places where the Shebab have abandoned fixed positions, most notably in the capital Mogadishu, they have switched to guerrilla tactics and remain a threat.

Analysts have warned that the Shebab — who implement an extreme form of sharia law in the areas they control, amputating hands of thieves and stoning “adulterous” women — can sow just as much chaos with guerrilla tactics.

The Shebab spokesman Rage warned that: “We are still in the outskirts of Kismayo and it will remain a battle zone… the enemy will not sleep peacefully.”