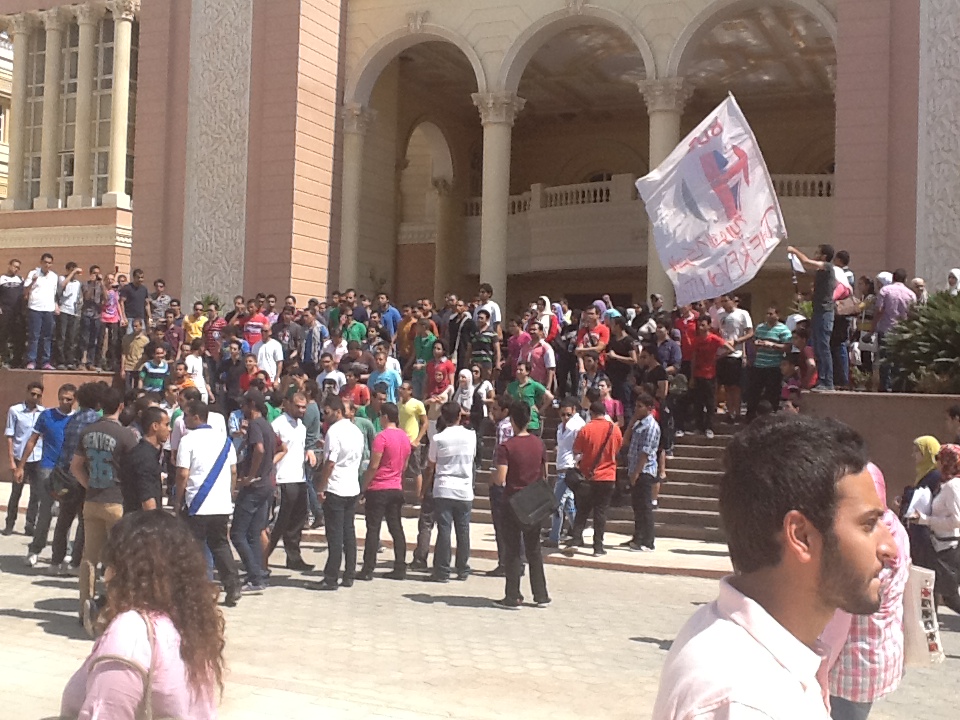 The two week sit-in at British University in Egypt (BUE), ended on Saturday afternoon after the university president finally signed a compensation package for the students who missed out on the dual Egyptian/British degrees offered as standard by BUE. This victory follows a crude verbal outburst by Mohammed Fareed Khamis, the chairman of the university’s board of trustees, who insulted a student’s family on Thursday.

According to Omar El-Alfy, the student union president, Khamis was giving a talk to the students on Thursday and “a student came in late and so he repeated some questions, Khamis was annoyed and yelled at him, the student was calmed by his colleagues and so Khamis insulted him in front of everyone.”

There is an audio clip of the verbal exchange uploaded on to YouTube in which Khamis is heard insulting the student’s family. The students involved in the protest filed a complaint with the Shorouk public prosecutor against Khamis, which has now been withdrawn following the approval of the compensation package.

Khamis returned to the sit-in on Friday and apologised. On Saturday the students closed all of the gates to the university, except the student and staff entrance in order to allow classes to continue.

The sit-in lasted for two weeks, with the students from the faculty of petroleum engineering demanding compensation as they did not receive two degrees (one Egyptian and one British) on completing their studies.

Usually BUE offer two degrees as standard but the students from the faculty of petroleum engineering missed out, because the partner university in Britain, Loughborough University, does not have a petroleum engineering department. The department’s students paid the same fees as students who received both Egyptian and British degrees, and were been joined in protest by this year’s intake.

As student union president, El-Alfy was involved in the negotiation process. At a meeting with Khamis on 23 September an agreement was reached. El-Alfy said that while the offer had been accepted by the students, they wanted the president of the university “to sign a pledge that has all the promises and offers we got from Khamis,” which happened on Saturday afternoon. The final package of compensation according to El-Alfy was “EGP 67,000 and a master’s course at any university in Egypt for each student, and four master’s scholarships in the UK.”

On Saturday morning El-Alfy said “we closed the gates as a form of escalation.” He believes that this action, coupled with Khamis’ outburst, is what finally brought victory for the students and ended the sit-in.