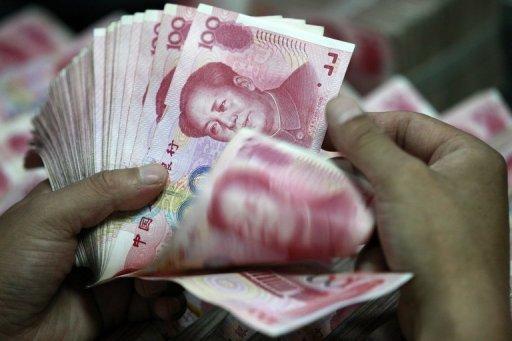 Hong Kong (AFP)- Asian markets rose on Thursday on hopes for fresh Chinese stimulus as well as bargain buying, but gains were mostly capped as fears over Spanish and Greek debt returned to the fore.

With violent anti-austerity protests breaking out on the streets of Madrid and Athens, concerns have continued to mount that the market euphoria from this month’s central bank stimulus announcements has evaporated.

After weeks of calm that saw the European, US and Japanese central banks unveil plans to boost growth, focus has returned to the eurozone, and in particular Spain and Greece, which has led to a sell-off in recent days.

But regional sentiment was lifted Thursday by solid gains in Shanghai, where there are hopes the government will soon announce fresh monetary easing to boost the economy.

Chinese markets are closed next week for the National Day holiday, which observers hope will provide a chance for leaders to introduce measures such as an interest rate cut or a reduction in bank reserve requirements.

Dealers have been awaiting action from lawmakers as the economy continues to slow in reaction to slumping demand in debt-hit Europe and the United States, which has hit manufacturing.

“I think there is a certain level of expectations that China may launch some type of economic stimulus measures over the long weekend,” Jackson Wong, an investment manager at Tanrich Securities, told Dow Jones Newswires.

He added there may also be some clarity on when the five-yearly Communist Party congress will take place, which will remove some uncertainty.

Also helping to lift the mainland were easing fears over a share glut after a report in the state-run China Securities Journal that shareholders in 32 firms on the ChiNext would not sell after a lock-up period ends soon.

In Europe thousands of protesters rallied near parliament in Madrid for a second straight night as the government prepared to pass its 2013 austerity budget on Thursday, with 39 billion euros ($50 billion) in savings.

The trouble came as the country’s borrowing costs broke back above six percent and towards the seven percent danger level seen as unsustainable.

With the passage of the budget Spain should be able to apply for much-needed bailout cash from the European Union, European Central Bank and International Monetary Fund, which would open the door for the ECB to begin buying bonds.

However, Prime Minister Mariano Rajoy has refused so far to ask for help until he knows what the conditions are — a situation that has left dealers in limbo.

In Athens, police and masked youths clashed during a general strike in protest at a new round of austerity introduced as it tries to unlock the next batch of cash from a rescue package that is needed to pay wages and bills.

“The main focus for investors globally is once again Europe, with Greece and Spain remaining the main concerns,” said Jason Hughes, head of premium client management at IG Markets Singapore.

“Neither seems able to do enough to put its house and mountains of debt in order, and most developments have not appeased markets for long,” he said in a market commentary.

“Despite all that has been promised so far by the ECB (European Central Bank) and the moves forward by politicians, we seem to be as far as ever from the endgame for the eurozone crisis.”

On oil markets, New York’s main contract, light sweet crude for delivery in November was up 32 cents to $90.30 a barrel in afternoon trade after closing overnight below $90 a barrel for the first time since August 2.

Singapore Telecom was flat at Sg$3.20 and Asia Pacific Breweries (APB), the subject of a takeover bid by Dutch beer brewer Heineken, finished at Sg$52.9 on the eve of a shareholders meeting widely expected to approve the offer.