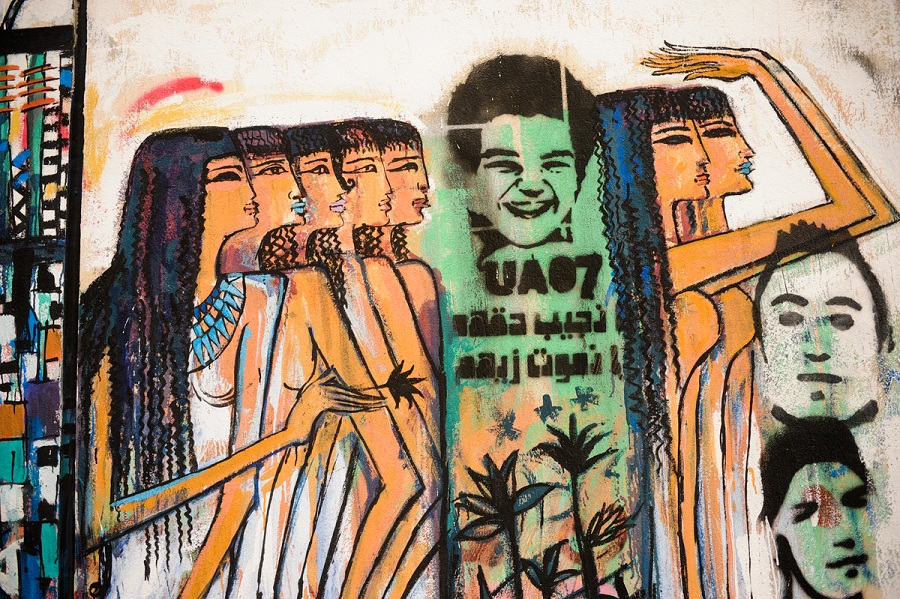 Students at Asyut University put together a workshop on Saturday, to teach fellow students and graduates how to create graffiti, an increasingly popular art form used by youth to express political messages.

Artist Mostafa Abdel-Hamid (18) leads the workshop, which will run until Thursday. Abdel-Hamid, who has been drawing for eight years, has experience in teaching children how to draw. “I used to draw portraits and caricatures then I started to work on the streets along with a group of friends, and that’s when I learned to spray paint,” he said.

He was approached by two friends of his, Mo’em Essam and Othman Mohamed, “who wanted to spread some culture in the university so they picked me to hold this workshop.”

Essam says that the idea came to him after the famous and popular graffiti along Mohamed Mahmoud Street in Dowtown Cairo was painted over. “We wanted university students to learn and Mostafa is an artist so we started gathering people to spread culture in the university.”

The workshop is the first of its kind in Asyut and on Saturday, the first part of the workshop, the participants learned the basics of drawing.

“We did a good job and the organisation of the workshop was really good,” said Abdel-Hamid.  The young teacher was impressed with the drawings the participants produced. “About 20 of them made works that I never expected to see them make,” he added.

Thursday will not be the end of the project. The talented participants, “will be part of teams and we will take to the streets. Graffiti has always been considered distortion of walls and that it is something absurd. It isn’t absurd anymore, it makes the walls speak and express an idea,” Abdel-Hamid said.

The number of students to take part in the workshop was around 30. “On average they will be between 25 and 30 because some people will join and others may decide to leave,” said Essam.

“For a graffiti workshop in Asyut, that is a really good number,” said Ahmed Abdel-Kereem, who was helping with the coordination of the workshop. He was expecting the number of participants to be far less.

“Only eight or nine of them were our friends. Most of them were people who were new to us and who came because they were interested in the workshop, so this is a great number,

“We don’t have any resources, the workshop was held in a cafeteria inside the university because we can’t afford to rent a hall in the university. The only materials we were using were pencils and papers,” Abdel Kereem added.

To Abdel-Kereem, like many other youth, graffiti is part of the revolutionary struggle. “Chanting has less of an impact nowadays, so we have to create alternatives. Graffiti has a good impact,” he explained.