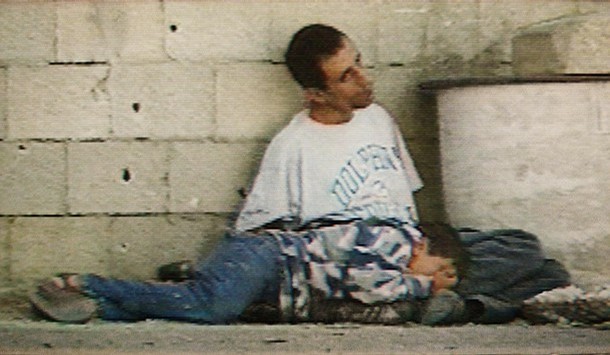 For those who’ve seen the footage, the image of the 12 year old Palestinian boy from Gaza being shot to death as his father tries to protect him is hard to forget, even 11 years on.

“The boy is dead,” you can hear Jamal Al-Durra cry at the top of his lungs several times in the video. Within seconds of the father’s frantic yelling and waving in the air calling on the shooters to stop shooting, both father and son stop moving. Mohamed Al-Durra had died, Jamal was injured. The tragic incident took place near the Netzarim inside the Gaza Strip and the shooting lasted for over 45 minutes.

The controversy surrounding the killing of the twelve year old Al-Durra did not stop at who shot him but in an appearance at the 11th anniversary of the shooting on the private Egyptian Al-Hayah Channel, Jamal Al-Durra said it is claimed that his son was never killed and that he is still alive.

“I hid next to the concrete cylinder you saw on television and I tried with all my power to protect my son and I put him on my right side…. The bullets penetrated my entire right arm,” Jamal said in his Al-Hayah appearance. The son was first shot in the knee. When Jamal Al-Durra told him not to be scared, he replied, “Don’t be scared dad, I will wait until the ambulance comes.”

“Minutes later, he was falling on my right side and the bullets were coming out through his back. I realised that he had become martyred at that point.”

The incident took place on 30 September 2000, at the outbreak of the second Intifada, also known as the Al-Aqsa Intifada, in reference to Al-Aqsa Mosque, located in the ancient Palestinian city of Al-Quds. The Second Intifada broke out a day after then Israeli prime minister Ariel Sharon entered the mosque, the third holiest site in Islam, along with around 1,000 Israeli security forces, wearing his shoes.

Regarding the incident, the Palestinian Centre for Human Rights (PCHR) said that the father and son who are from Al-Boreij were shot at by “Israeli occupation forces, which resulted in his death and the severe injury of his father, is one of the starkest examples of the grave and blatant human rights violations of Israel against Palestinian civilians.”

Abu Rahma confirmed that the killing of the father and the injuring of the son was intentional and in cold blood.