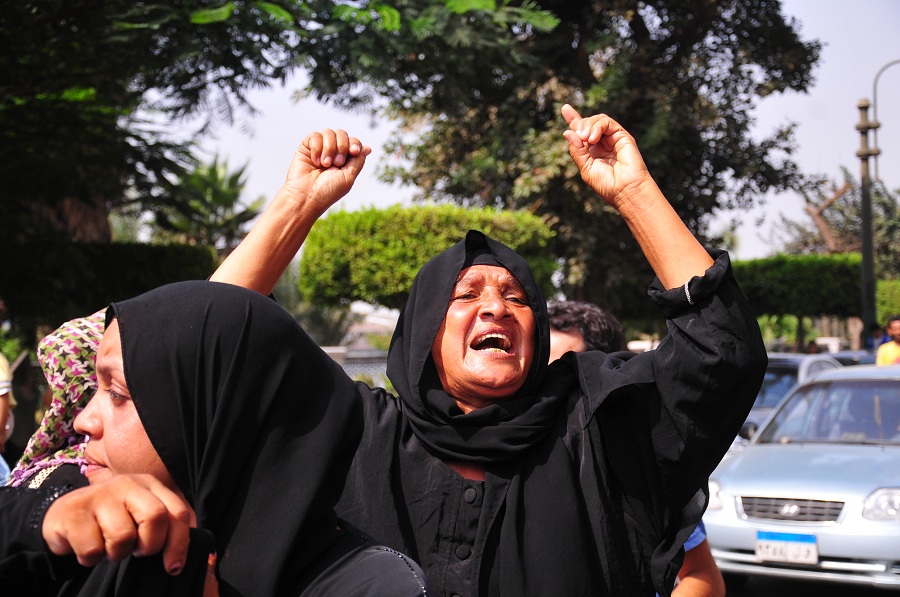 Residents of the Ramlet Boulaq area marched to the prosecutor general’s office at the high court building Sunday, demanding the end of an on-going police crackdown on the inhabitants and the release of dozens of prisoners.

The march was organised as part of the Socialist Popular Alliance Party’s “Alive in Name Only” campaign in coordination with the Ramlet Boulaq Popular Committee.

“We demand the trial of all officers involved in crimes of torture, false accusations and other rights abuses; we reject the thuggish system security forces employ in their periodical attacks on the area; and we also reject the Cairo governor’s decision to seize the Kafrawy and Ezzawy Shacks [areas in Ramlet Boulaq] land that we were born in and lived in for several decades,” read the popular committee’s official statement.

After marching from Ramlet Boulaq to the prosecutor general’s, two representatives of the popular committee and two lawyers representing the community were allowed to meet with Prosecutor General Abdel Meguid Mahmoud.

“The prosecutor general promised us that the entire 2 August Nile City events investigation would be reopened and that the Boulaq police station officers would be investigated,” said Ayad Arab, head of the Ramlet Boulaq Popular Committee.

Arab said he was disappointed in the human rights lawyers who accompanied him for failing to draft a proper case.

“We sat down together yesterday and wrote down the name of every single officer and what they had done exactly and whom they hurt, only for them to present a memo that vaguely accuses ‘Boulaq police station officers’ without naming names,” he said.

According to Arab, another march will be held soon to protest the Cairo governor’s decision to seize the Ramlet Boulaq lands. The Egyptian Centre for Economic and Social Rights had appealed the decision with the Administrative Judiciary Court and the trial is set for 9 October.

Ramlet Boulaq residents, especially those who live in the Kafrawy Shacks area, say they have been subjected to a campaign of police brutality, arbitrary arrests and attempts of forced migration by security forces, the Cairo governorate, and the owners of the nearby Nile City Towers.

“We won’t leave and we won’t sell” and “We won’t, Sawiris should leave” were two popular chants in the march, the second being a reference to telecommunications tycoon, Naguib Sawiris, who is one of the Nile City Towers owners.

Residents say Sawiris has long tried to buy off the land on which they live in order to build an extension to the towers. They accuse him of offering prices that are 12 times less than the actual value of the land and employing illegal tactics such as pressuring the government into forcefully evicting the residents.

“Oh prosecutor general how much do you want for the Ramlet Boulaq land,” chanted the inhabitants of Ramlet Boulaq in response to what they saw as clear government bias towards Sawiris. “The marriage of slums and investors is invalid,” read a protester’s sign.

The animosity between the Nile City management and Ramlet Boulaq residents had calmed down after the 25 January 2011 uprising as towers management hired the residents as security guards during the security breakdown.

“Amr’s blood must be avenged,” the marchers chanted. It was the death of Amr El-Bunni on 2 August that triggered violent clashes between police and residents after several residents broke Nile City Towers glass and set fire to cars parked there.

El-Bunni went to collect wages for the security work he did for the towers that day when he got into a verbal altercation with a tourism police officer. The officer fatally shot him in the back. No charges were pressed and the officer was honoured for his “courage.”

After the clashes were over, police attacked the Kafrawy Shacks at dawn, arresting dozens of men while breaking into houses and destroying doors. Since then, the Ramlet Boulaq residents have been complaining about an arbitrary arrests campaign where any male who steps out of the shacks area is taken.

The popular committee held a press conference on the matter earlier this month, only for another resident to get arrested immediately after the conference, although he was quickly released.

“I haven’t been to school this year at all. They take anyone who steps out of Ramlet Boulaq,” said one child. He looked no older than 14.

An older gentleman by the name of Gaber showed journalists and television camera crews the bullets used by police on the residents, while woman who goes by Um Hani talked about her two sons and brother who were taken by the police.

“My sons are workers, they have shops, one of them is a mechanic so they are not thugs,” Um Hani said fervently. “During the clashes my daughter’s little children fainted from the tear gas so my sons and brother went out to the policemen just to ask them to have some mercy.”

The commanding officer on the scene responded by arresting Um Hani’s brother and sons, she said. She added that her sons and brother were not involved in the clashes and in fact were actually protecting the cars parked at the towers from being burnt.

“The police have attacked my home later and took over EGP 3,000 from my house. I asked the officer to let my sons go, I said ‘please let them go son’ and he said ‘I am not your son I am a police chief’ before hitting me and pulling my hair in public,” she said.