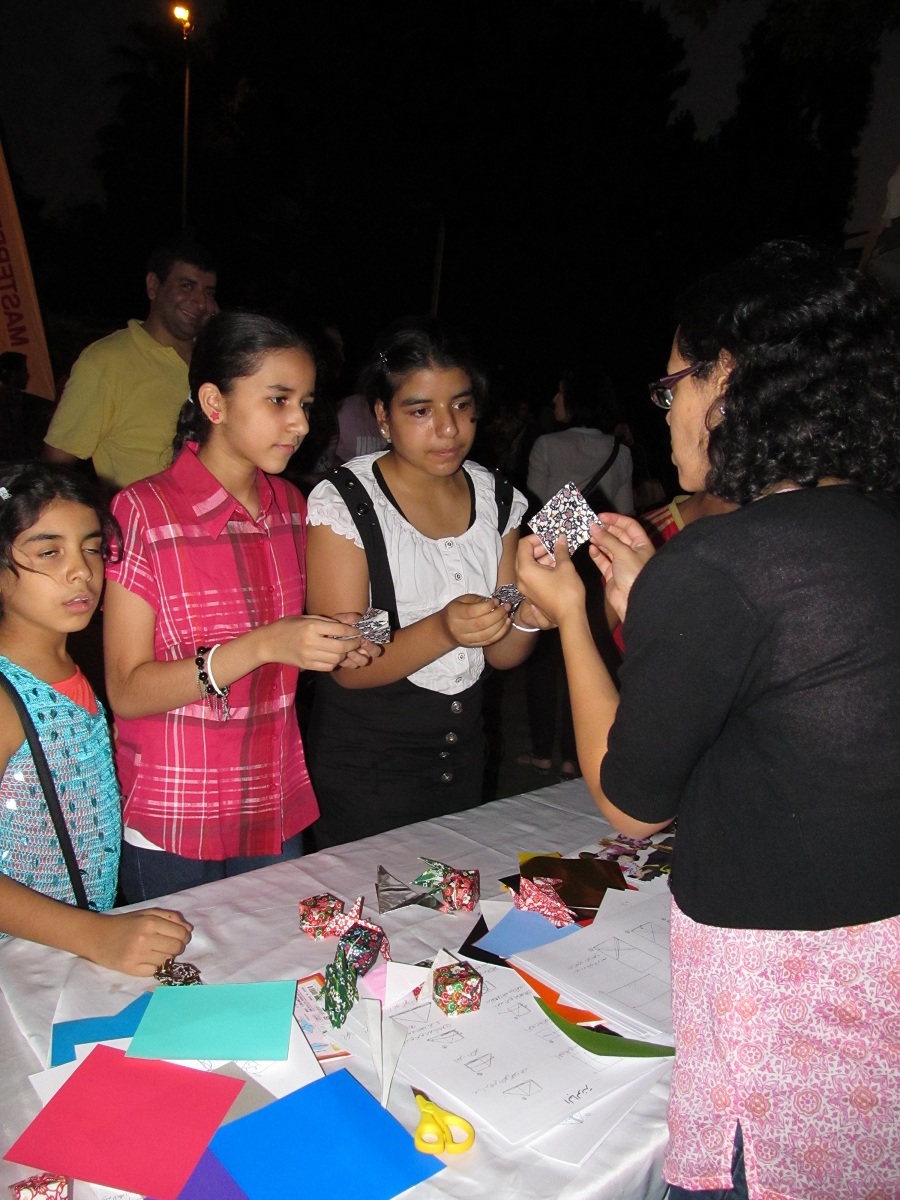 When you come down from 6th of October Bridge in Dokki, you see the beautiful graffiti on the walls of the Ministry of Agriculture, drawn by youths who participated in the Street Art Festival held on Friday organised by the MasterPeace organisation.

MasterPeace is an international organisation promoting global peace and understanding through events, music, arts and seminars.

Friday was the second edition of the free festival and around 700 people attended. The event’s activities started at 4pm and included graffiti workshops, drawing on the street, the walls and the ground. Several organisations set up booths to advertise or sell their ideas or products and on the stage bands competed for the “Best Band” prize.

At the entrance of the blocked off street, a huge pick-up truck carrying bicycles welcomed the younger attendees, who rented bicycles and signed up for cycling training.

Booths lined both sides of the street and included a photo booth filled with people dressed as clowns with whom you could take a funny photo, booths for drawing Henna and nail polish art, eco-friendly accessories, arts and design and others.

The TEDx organisation, famous for their stimulating seminars, had a booth promoting “ideas worth spreading.” People wrote ideas on a small piece of paper and put it inside a balloon. After mixing these ideas together people picked a balloon and by blowing it up they got to read the idea inside it.

Rotaract, the youth organisation of the Rotary club, had a bakery stand, selling all kinds of baked goods to raise money for orphanages. Rotaract brought 20 orphans to the event to play games, draw and learn. Mai Abdel Wahab, Rotaract al-Oboor president and co-founder, said that she thought the festival was an excellent opportunity to help these kids engage in the community. “Our values are based on building peace and understanding, and that is why we participated in this festival,” she said.

The Japan Foundation drew a lot of attention with its booth. On the large tables of the booth people were introduced to Japanese calligraphy, where they could get their names written in Japanese; origami, where everyone could turn coloured paper into delicate shapes; and to Igo, a traditional Japanese game. Igo was very popular and scores of people joined in the fun.

“I am very happy that many Egyptians are interested in Japanese culture,” said  Masakazu Takahashi, the director of Japan Foundation.“The Japanese people suffered a lot from the atomic bombs in Hiroshima and Nagasaki and that is why we are so conscious about peace, and that is why we are here today,” Takahashi said. He added that his organisation will organise more workshops about Japanese pop culture in the coming months.

The crowd grew when the bands took to the stage. The festival’s schedule included performances by the Alwan Band, Kayan, SimpleXity, the Shawarina Band, May Abdel Aziz, Shady Ahmed, the Alama Band, the City Band and Zap Tharwat.

Mohamed Samir, a founder of Kayan explained that MasterPeace invited them to participate in the festival. They performed four songs in both classical and colloquial Arabic and the crowd was enthusiastic in their response.

Shady Ahmed captivated the spectators with the acoustic music he played on his guitar, on which is written “aspire to inspire”. The crowd loved his music, the lyrics and his unique voice.

City Band presented one of the best performances of the evening and had the crowd jumping and dancing to every song they played. The band plays a fusion of jazz, rock, blues, and oriental music. “We sing in Arabic, about the daily social and political problems people face. Each one of us comes from a different background and that makes our music special,” said Faisal Fouad, the band’s pianist. He added that he was very happy with the festival and very enthusiastic that the theme was peace.

The festival concluded the series of events organised to promote peace. The events started with the celebration the international peace day on 21 September, followed by several seminars and conferences on peace building and conflict resolution, movie nights and concerts to promote peace through music.