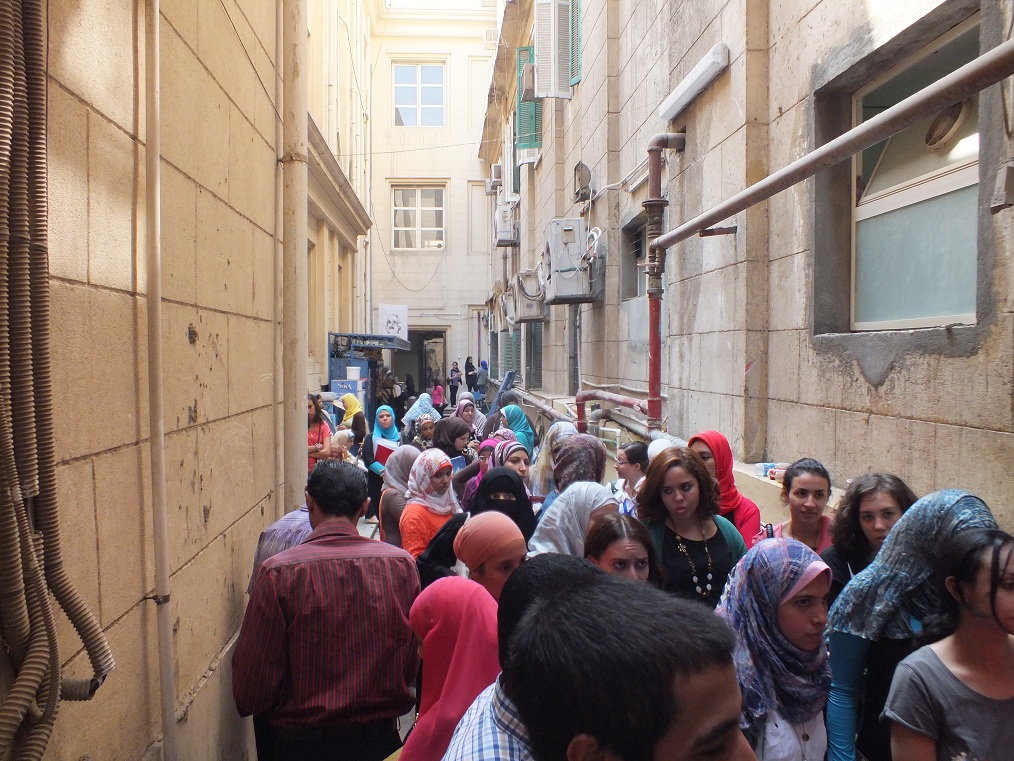 Second-year students of the faculty of economics and political science at Cairo University continued striking on Sunday, as a result of an increase in tuition fees and the poor services they receive in return.

The students said they did not find their faculty’s slogan, “commitment, excellence, distinction,” applicable to what they have actually experienced since they joined the faculty.

“The strike is a result of a series of disappointments we faced since we joined the faculty, which is termed by many people as a [top faculty],” said Ahmed Khalaf, a second year student, assistant secretary of the cultural committee in the faculty’s student union, and one of the organisers of the strike.

Ahmed said that conditions were getting worse every day, until Wednesday, 26 September, when the second year students entered their room to attend a lecture, to discover that the air conditioning and the screen projector were not functioning. That is when they decided to leave the lecture room, and head towards the office of the faculty’s dean, Dr Hala ElSaeed.

Later, some students gathered and agreed to implement a strike on Thursday, 27 September.

The faculty students have since boycotted lectures, chanted slogans of their demands and chosen six students, including Khalaf, to meet the vice dean of the faculty, Dr Abdel Nasser Saad.

The students’ demands include a detailed account of how their tuition fees are spent, improved services provided to students, the provision of a space to hold lectures inside the Cairo University campus for first year students, and the consideration of students’ feedback regarding teaching standards. They also ask for the establishment of a partnership with a European university, to enable the award of a double certificate.

“This year, the fees were decreased to EGP 7,000, which might sound acceptable. However, the trick is that that EGP 7,000 doesn’t include any books or references, which cost EGP 1200. So at the end, we pay the same fees, which is EGP 2,000 more than what previous students used to pay” added Hazem Ehab, a second year student and a member of the arts committee of the faculty student union.

Ahmed explained that when he started his studies, along with 1500 students, he realised that the faculty is too small for the number of students. The lecture rooms, the cafeteria, and other facilities are suitable for around only 500-600 students.

The faculty received 1,800 junior students this year, and with the lack of sufficient lecture rooms for their number, the students currently take some classes at the university students’ residence, outside the Cairo University campus.

“Those junior students were also one of the main reasons for our strike, as their tuition fees are around EGP 11,000, and they have even less services than we do,” said Hazem.

“We complained about the increasing number of students, and that we get nearly no services for the fees we pay, but Dr Hala replied that we could have joined any other faculty, and that we can move to another faculty if we want to,” added Amany.

“We submitted our demands, and Dr Abdel Nasser, the vice dean of the faculty, simply explained that the number of students is not determined by him, rather by the university registration office, which sent 1,800 students to the faculty, while he only requested 500,” said Ahmed.

The vice dean said that the amount of tuition fees is decided by the supreme council of universities, and not by the faculty’s administration.

Responding to the poor services complaint, Abdel Nasser said that Cairo University takes 50 per cent of the tuition fees, while the ministry of finance takes 20 per cent, and the remaining 30 per cent are left for the faculty to fund all its projects and activities.

“He also pointed out that the tuition fees paid by the English and French section students are the ones supporting any enhancements taking place at the faculty, as the Arabic section fees are around EGP 150,” added Ahmed.

The faculty’s administration couldn’t be reached for comments on the strike.

As a result, the students have decided not to pay the tuition fees until their demands are fulfilled.

“We are looking forward to escalate our strike to a higher level, and we are currently coordinating with the students of the faculty of mass communication, who have nearly the same complaints and demands,” concluded Hazem.