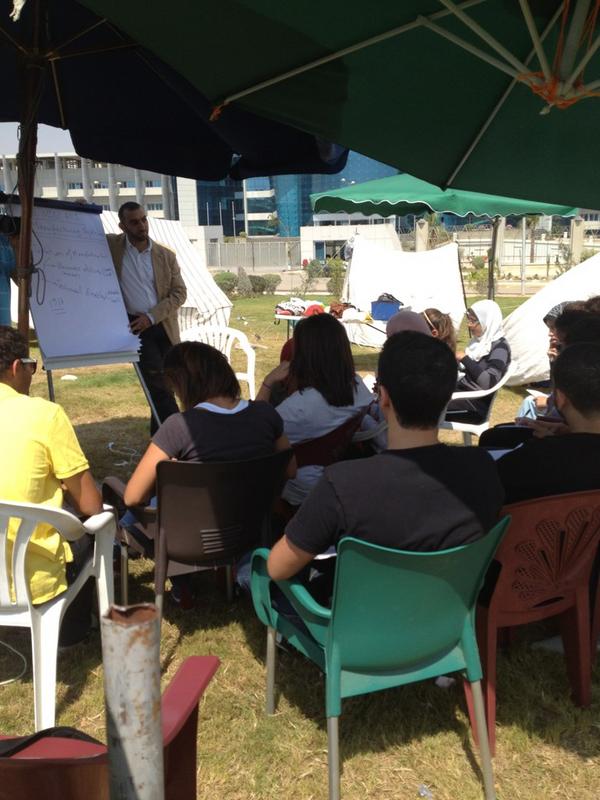 “The first discussion took place inside a tent slightly larger than the one we used to hold classes,” Nancy Mustafa, one sit-in participant who had attended the discussion which started at 10 am, said, “over 20 people attended the ceremony, university professors and students.”

Both discussions were held in the centre of a Nile University students’ sit-in protesting  a government decision to hand their campus over to a science centre named after Nobel prize winning Egyptian chemist, Ahmed Zuweil. The protesters were offered the compromise of sharing the campus for three years and then moving to another site, but they insist the buildings should remain under Nile University ownership.

Zuweil appeared on state TV on Thursday, saying the Egyptian government had assigned him empty buildings on the now Nile University campus ten years ago. In addition, he claimed Nile University after gaining ownership of these buildings, had given them up, agreeing that the legal papers with which they had acquired the buildings, were not credible. He added he was continuing with plans to set up Zuweil City, and had established a board of trustees consisting of 12 Egyptian as well as foreign scientists, including Egyptian Professor of Cardiothoracic Surgery at Imperial College London, Dr. Magdi Yaqoub.

“I hate to say that, but Dr. Zuweil is lying to the people,” Ahmed Nassar, the head of Nile University Student Union said in a statement accusing Zuweil of abusing his credibility among the people and spreading lies about Nile University.

“We’ve been disclaiming his statements for months now only to find him renewing them all over again,” Nassar said. “We expected him to come out and say; ‘I’m sorry’, or at least say anything new. However it seems like he has nothing new to add.”