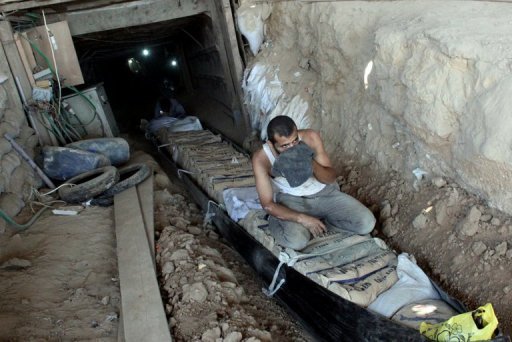 There is no plan to establish a free trade zone between Egypt and Gaza, according to presidential spokesperson Yasser Ali. MENA reported Ali rejecting the proposal on Monday, despite Hamas being hopeful that the plan could still go ahead.

Hamas proposed the idea during a recent visit to Egypt by Gazan prime minister Ismail Haniyeh. Monday’s announcement came as a surprise to Hamas. Dr Yahya Moussa, a member of the Hamas legislature, said he believed, “Egypt is ready for this.”

“Free trade areas (FTA), as we understand them in international (trade) law, concern the commitment of two or more states to minimise or free price controls on their respective imports and exports,” said International Law Professor Dr Zeray Yihdego.

“However, some non-state entities such as Taiwan have entered into FTA framework with countries like the USA. This means that Egypt and Palestine can establish an FTA between them to allow the free flow of goods.”

This would be particularly effective in Gaza, which faces an international blockade on imports to the densely populated territory. “If Egypt and Hamas/Palestine entered into an FTA, the latter would be able to export agricultural products like fruits and furniture, iron and steel, et cetera without any hassle and charges,” said Yihdego.

“Similarly, Egypt would be able to export building materials and other essential goods including oil to Gaza, which would have a positive impact to the economy and livelihood of people in Gaza who have suffered from illegal occupation and blockage of imports and exports.”

In addition, Dr Hani Al-Basoos, assistant professor of political sciences at Islamic University in Gaza, said a free trade zone “would reduce the need for the illegal tunnels.”

The closing of cross-border tunnels should appeal to leaders in Egypt and Israel. “The FTA may have some benefits to Israel,” said Yihdego.

“It may be an opportunity to permanently close the tunnels in Rafah which have been the source of illegal activities there. The FTA may also bring some economic advantages to Israel as Israel supports the Gaza economy in one way or the other. However, Israel will still have security concerns over free movement of goods from, and to, Gaza.”

This may be one of the reasons that Egypt is not going forward with the Hamas proposal. “First, it may affect their tense relations with Israel in case things go wrong,” said Yihdego. “Second, recognising Hamas as an FTA partner may send a negative message to the Ramallah authorities [Fatah] about Egypt,” and where they stand on the future of Palestine.

Angering Fatah is not the only way a free trade zone could affect the future of Palestine. Al-Basoos said, “the Palestinian Authority fears that Gaza would become detached from Palestine and reliant upon Egypt.”

Egyptian Taqui Abdin agreed, warning, “this could result in Israel offloading their problems onto Egypt and undermine Palestinian sovereignty.”

The Middle East Monitor cited Egyptian authorities who feared an increasingly independent Gaza could be taken advantage of by Israel, effectively annexing Gaza to Egypt and turning Israel’s issues in Gaza into something that Egypt would be responsible for.

Al-Basoos downplayed these concerns, saying “there will need to be unity between Hamas and the Palestinian Authority. There is a fear that due to Hamas’ connection with the Muslim Brotherhood, Gaza will become politically dependant on Egypt and be separated from the rest of Palestine.” In fact Al-Basoos stated that in the proposal, “there is an emphasis on Gaza being part of Palestine.”

Yihdego said if it “leads to a broader FTA to include the whole of Palestine that will really mean something to promote the (legal and political) entitlements of the people of Palestine to pursue their economic and foreign relation interests.”

“This proposal,” added Al-Basoos, “is trying to provide basic needs for the Palestinian people with dignity and decency.”