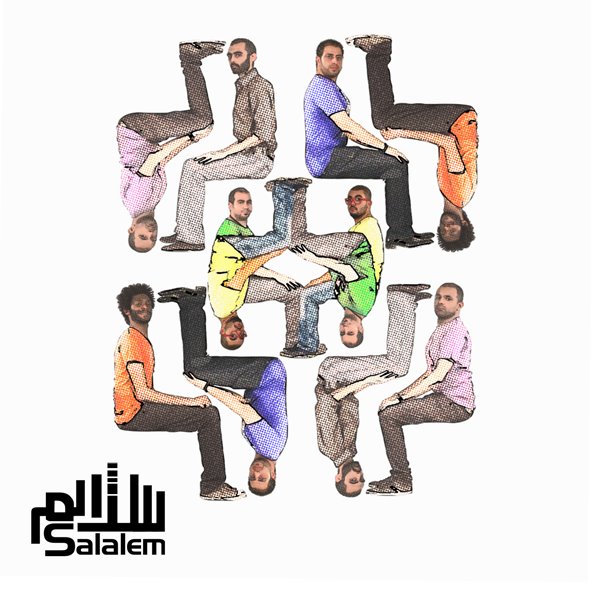 The band was barely three songs into their set when the electricity was cut. It could have been a mood breaker, but the audience’s elation led to a mawkish but charming happy birthday song, sung in the dark, accompanied by a few jokes pertaining to electricity bills.

The occasion was Salalem’s seventh birthday at the Cairo Jazz Club on Saturday. The band was commemorating their first gig which took place exactly seven years ago, as lead singer Mohammed Jamal told the happy crowd, many of whom were wearing playful birthday hats.

Jamal talked to us before Salalem’s performance and introduced us to the rest of the band. He told us that the band originally started while they were in college, “We started out as an amateur group but then we wanted to do this as a career. We have changed our line up a few times over the years, but the founding members are still here and we have maintained the same line up since 2007.”

The music of Salalem is not easy to classify. The first thing we noticed is that the music is accessible and influences of pop can definitely be felt in their songs. However, contemporary Egyptian music, funk, Egyptian pop and folklore also take a prominent place in their music. In fact, a very memorable part of their show revolved around the crowd doing an interactive dance with the group, as they sang a famous Egyptian pop song.

“I would describe our music as indie pop. It is made to be accessible, both in terms of music and substance, to all demographics and to make people have fun,” Jamal said.

According to Jamal, Salalem’s sound has changed drastically over the years. “We sometimes listen to our first songs and we end up laughing. We have matured a lot over the years. I think the years of going onstage, interacting with our audiences, and generally just growing up has had an impact on our music. And our audience has also matured along with us.”

Each member of the band cites different musical influences that impacted their music. From mainstream Arabic pop legends Amr Diab and Mohamed Mounir, to Dave Mathews and Masar Egbari. One common thing they all share is that they find inspiration in their surroundings, “we try to keep our lyrics about realities that we ourselves live, and problems that we have lived through and know, and that keeps the music genuine and heartfelt,” said Jamal.

The band says the revolution has brought underground Egyptian music to the forefront. “The revolution and the new focus on social media has meant that underground Egyptian music is receiving more attention than ever now,” lead guitarist Amr Sayed said. When asked whether the new found attention would bring the scrutiny of the censors on this particular segment of the music scene in Egypt, the band resolutely said no, because “the people are not scared anymore.”

The band told us they are working on the release of a new single from their album with a music video to follow. For a band to reach a seventh birthday in a scene that is only just being discovered by mainstream audiences is no easy feat and judging from Salalem’s fans they will have many more.