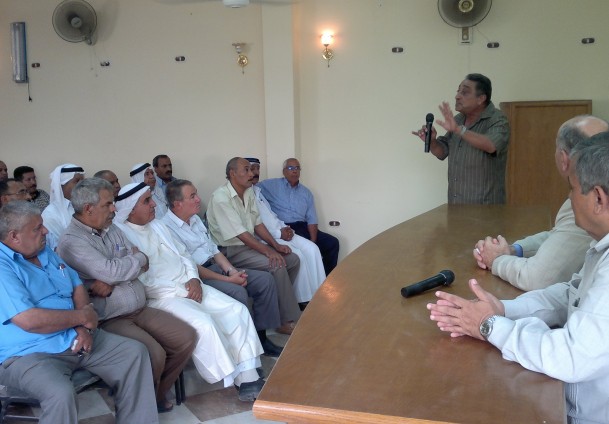 A majority of Christian families, who left Rafah under the threat of unidentified gunmen, returned to their homes from the nearby city of Al-Arish on Monday.

Nine Christian families living in Rafah were forced to leave and were moved to the governorate’s capital, 40 kilometres away. Six have now returned, while the remaining families hesitated to do so, deciding to spend their days working in Rafah and returning to Al-Arish for the night.

The Governor of North Sinai had requested that the families return to their homes, advising them to not leave their homes for an intitial period of four days, during which time special attention would be given to their protection.

The people of Rafah received the Coptic families’ return with the town’s tribal and familial leaders, who provided reassurance in a conference that their Christian neighbours would live in safety.

Those participating in the conference, which was held in the city council, blamed the Israeli intelligence service Mossad for being behind the shooting of a Coptic man’s store last Tuesday, denying the participation of any Rafah resident.

“The Israeli Mossad seeks to sow seeds of discord, taking advantage of the circumstances in which the country is at the moment,” said Aref Abu Akr, a town sheikh.

“What happened was intended to create a rift between the people of one nation as a result of lack of security in the region,” said Eissa Al-Kharafeen, a former member of the town’s parliament.

Khalaf Said, one of the Christian residents, said, “we have not felt any difference in our treatment during our time here in the city over the last 30 years.” Said, a schoolteacher also pointed out that he was not scared due to Muslim neighbours guarding his home following Tuesday’s shooting.

All the Christian families in Rafah arrived in 1982 after Sinai regained Egyptian sovereignty..

In his meeting with families Governor of North Sinai Major General Abdel Fattah Harhour reassured them and discussed security concerns. “All state institutions are concerned about the issue of the Christians of Rafah,” said Harhour. “They will not allow anyone to come near them.”

Harhour pledged to stabilise the security situation in Rafah over the next few days, and asked Coptic families in his meeting with them on Sunday to return to their homes, reassuring them that they would notice a big difference in security.

Harhour met a number of leaders of the Second Army, heads of Bedouin tribes, and leaders of the Salafist Calling in North Sinai on Saturday to discuss how to protect the Copts of Rafah. They all agreed to focus on providing all forms of protection.

On Monday military police arrived to Rafah with six armoured vehicles in order to provide reinforcements to protect the town’s Copts.