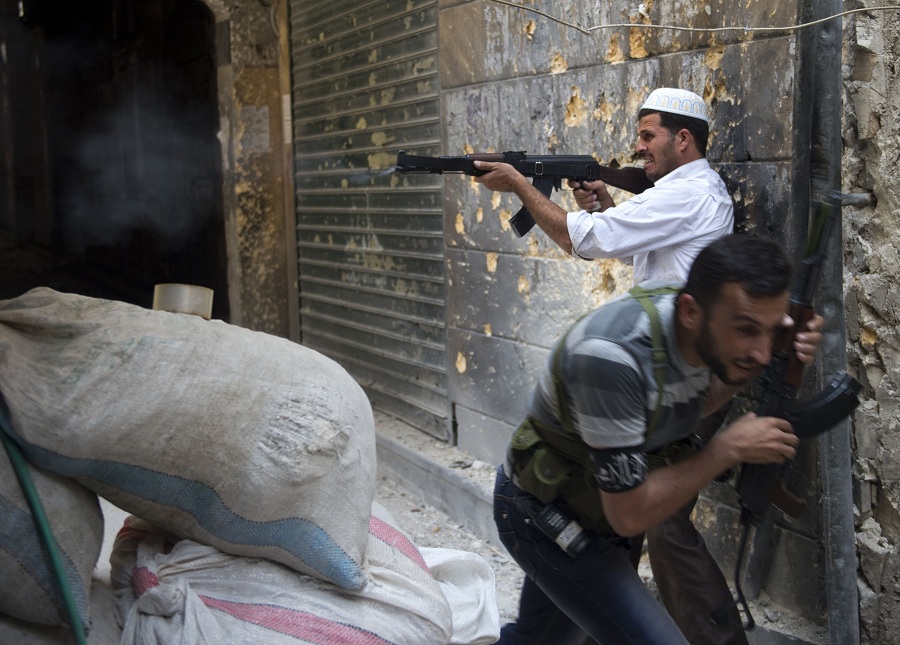 The United States is trying to recreate the scenario which led to the invasion of Iraq in 2003, the Syrian foreign minister has said while fighting continues across the country. Wallid Muallem told Al-Mayadeen TV on Monday that the issue of the Syrian regime holding chemical weapons stockpiles “is an invention of the American administration.”

Meanwhile an airstrike on the town of Salqeen in Idlib province left at least 21 people dead on Monday, eight of whom the Syrian Observatory for Human Rights (SOHR) reported were children. Salqeen is barely five kilometres from the Turkish border. The airstrike reportedly hit several buildings and due to the critical condition of many of the victims, SOHR stated the death toll may yet rise.

Around Aleppo at least 19 people died following a heavy bombardment during street clashes between government and opposition forces, SOHR’s network of activists recorded. In the Dera’a province eight people died from aerial bombardments and gunfire. In Homs, 18 people were reportedly killed and some 30 injured by an improvised explosive device and in an ambush.

The continued violence comes a day after fighting between both sides resulted in the partial destruction of a UNESCO world heritage site, the Souq Al-Medina, arguably the most well preserved medieval market in the Arab world, and its destruction could be blamed on the rebels according to Michael Collins Dunn from the Middle East Institute.

“The fact that the fires broke out during the rebel ‘final offensive’ to take Aleppo means the regime will of course blame the rebels, perhaps justifiably. But whoever lit the fires, the result is the same.”

In total over 160 Syrians were reportedly killed on Sunday. The SOHR said 74 were unarmed civilians, 17 were rebel fighters and a further 51 regime forces and 17 pro-regime militias.

On Saturday a member of Syrian President Bashar Al-Assad’s family, Mohamed Al-Assad, was badly injured. According to medical sources cited by SOHR, Mohamed Al-Assad was shot and his condition has deteriorated quickly. He was reportedly a head of a smuggling group and the observatory believes he was shot following an argument with rivals on Saturday night.

The United Nations security council has been unable to find common ground over the Syrian crisis. As the conflict continues, refugees have flooded neighbouring countries. The UN high commissioner for refugees (UNHCR) urged nations to increase their donations last week in order to deal with the refugee crisis. The UNHCR initially estimated 100,000 refugees would flee Syria by the end of the year but this figure was quickly surpassed in July and the new UN estimate for the end of the year stands at 700,000.