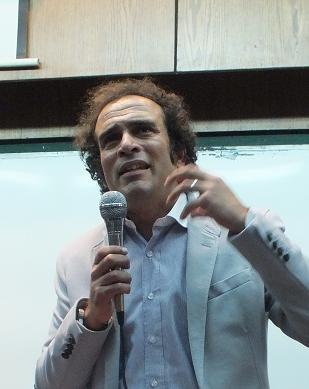 Amr Hamzawy held a seminar on Tuesday afternoon on the future of Egypt’s constitution and the current political structure of Egypt for the benefit of students at Cairo University.

Hamzawy, founder of Free Egypt Party, said that the Egyptians’ list of preferences is changing into a more politics-oriented list. He added that the role of students of political science is to lead this transitional stage, until the main political concepts are rooted in the minds of every Egyptian.

The former Member of Parliament stressed that politics should not be converted into an area of religious conflict, where some have the exclusive right of decision. He added that politics never ends, and that having a certain political group in power doesn’t mean the end of the world, especially when the group is incapable of responding to the people’s demands or even implementing its own promises.

“I mean that president Morsy’s 100-day plan was an absolute failure,” responded Hamzawy, when asked what he meant.

Hamzawy’s latest article was heavily criticised, as it was perceived that he called for foreign intervention in drafting the upcoming Egyptian constitution.

In regards to student movements, he mentioned that political activism was strictly banned before, and that the current atmosphere should be employed to raise political awareness inside universities, by representing different ideologies and holding debates. Not by turning the university into an area of competition and conflict between different parties’ supporters.

He added that Egypt’s main problem is that most of the political actors are incapable of managing a fair political debate. “They often turn to spreading fake stereotypes about anyone opposing them, through their electronic committees, who often start their statements by the word ‘I am not a Muslim brotherhood member, but …’ etc.”

Speaking about the constituent assembly, he said that its current members are not representing the different sectors of Egyptians. He also added that some members are trying to manipulate the demands of the Egyptian people, by limiting their rights and freedoms.

He said that forcing religious duties, such as Zakat (alms) into the constitution articles in not acceptable.

“It is embarrassing to think about constitutional articles allowing marriage of young women, instead of focusing on the demanded notions of social equality and citizenship,” said Hamzawy.

Finally, responding to a question about the displacement of Copts, he said that there is no difference between Muslims and Copts, and that action of displacement denotes the inability of the state to secure its citizens, regardless if they are Muslims or Christians.

The seminar, organised by Free Egypt student movement, was held at the faculty of economics and political science.