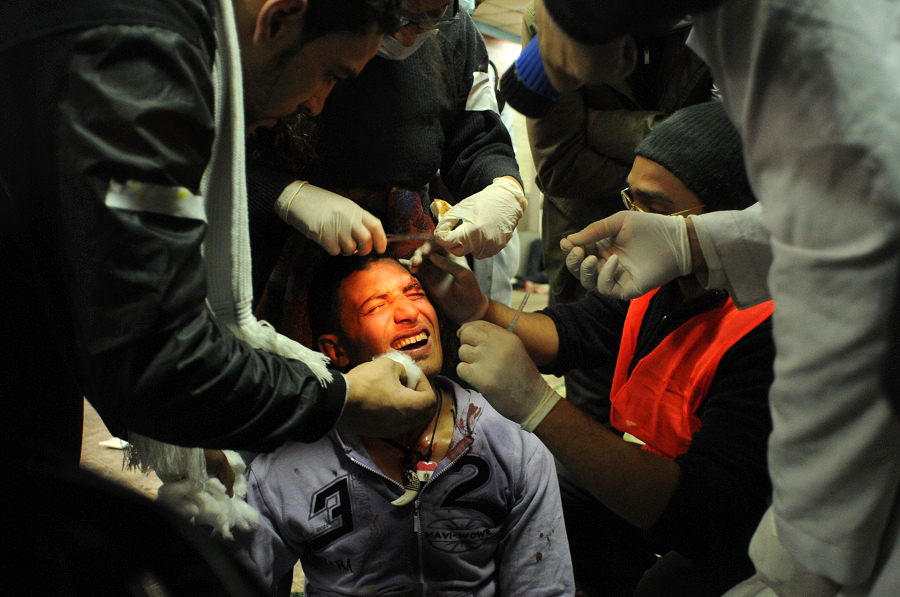 After transferring her from a room with five other patients on the fourth floor of the New Qasr Al-Eini Hospital, to a room shared with another patient on the ninth floor, the 21 year-old Mennatullah Ahmed lay comfortably in her bed surrounded by her family and friends. She welcomed two of her injured friends whom she knew from Tahrir. She jokingly asked them about where the live bullets hit them saying “in your stomach or in Tahrir?”

Mennatullah used to go to the square with her mother and father, but today she sits still. She cannot move her legs or arms and gets around using a wheelchair. However, she fills the room with the energy of a revolutionary young woman, even wearing a Guevara wristband.

“On 28 January, I joined the demonstrations and I fell on my left arm and many people fell on me…and despite the injury I continued going to the square,” said Mennatullah.

She is diagnosed with complex regional pain syndrome which resulted from a late treatment of a dislocation of her left arm. When she was injured, Mennatullah was only 19 years-old; today she is determined to study tourism once she is properly treated.

Her first demand is the retrial of all the officers who were acquitted. Second, she wants to see justice for the injured and real attention paid to their conditions.

Mennatullah met with the president’s adviser, Mohamed Fouad Gadallah, during his visit to the hospital and he promised to send her to Germany to get treatment. She sceptically awaits the promise to be fulfilled, “I trust no one; not the government, the people, or the National Council,” she said.

Outside of Mennatullah’s room stood Ahmed Abd El-Khalek, a 26 year-old air-conditioning technician who received a bullet in his thigh in front of the Ministry of Interior on Friday 28 January 2011, dubbed “the Day of Rage.” His thigh was poorly bandaged, allowing blood to seep through, and he walked clumsily on his two crutches.

Abd El-Khalek bled for hours before he was hospitalised in Demerdash Hospital. The shot fractured his thighbone and the doctors had to make a 60 cm opening in his thigh to evaluate the damage. This opening mistakenly cut the nerves in his leg. Doctors fit a plate in his thigh to treat his hip; yet his condition did not seem to improve.

“I went home with my thigh literarily pierced and I stayed like this till I heard about a woman who treats the injured from a YouTube video,” said Abd El-Khalek. He contacted Heba El Sweidy who bought him an imported thigh supporter.

“I had 32 surgeries and I’m undergoing the 33rd next week… I’m tired and the government is supposed to help me travel abroad to get better medical, but I feel neglected,” stated Abd El-Khalek.

Mennatullah and Abd El-Khalek are just two of more than 11,000 injured in the revolution, according to the former Health and Population Minister Fouad El Nawawy in a statement made to Al-Ahram on 21 January. However, according to the website of the National Council for Care of the Martyrs’ Families and the Injured (NCCMFI), established December 2011, there are only 5594 injured, causing many to cry foul.

Abdo Kassem, coordinator of the Association of the Revolution’s Injured in Cairo, believes that this discrepancy is due to neglect on the part of the NCCMFI, under the leadership of Hosny Saber. Many who should be recorded as injured have not been, with even non-injured people being mistakenly given injured status and receiving undeserved benefits from the council.

Detailed records of the actual numbers of the injured do not seem to be available to the public.

Even when ex-revolutionaries do manage to become officially registered, their treatment at the council is poor, with many forced to wait in line for hours, even days, claims Kassem. “It is shameful that the guilty were being treated at the International Medical Center while the victims are humiliated by standing in rows to get minimal rights.

Some injured were actually chained to their beds while being treated and others are still injured in prison, such as Mohannad Samir,” said Kassem.

Mohannad Samir was injured in a sit-in at the Council of Ministers in December 2011 where he was shot in the leg. When he went to give his testimony, Mohannad was detained and kept in Tora prison. His leg’s condition is deteriorating and may get amputated if not treated.

Mennatullah shares the same sentiments. She said, “you should have seen how humiliating it is to go to the National Council [NCCMFI], the employees are serving us behind bars as if we’re barbaric…We’re not asking for too much, we want to be treated like humans…We want bread, freedom and social justice, that’s what we chanted for and that’s what we still want to accomplish.”

Mohamed Tawfik has given up on government aid, calling it too humiliating. Tawfik got a live bullet in his head resulting in a brain hemorrhage. He stayed in a coma for 25 days, his left arm and leg were paralysed. Tawfik faces a difficulty talking normally, but he articulated his pains, hopes and demands eloquently.

He recently received a job in the railways in Ramsis and his mother is worried about him commuting. She sat next to him and lifted her hands upwards thanking God for saving her son.

She said “I’m thankful that he is not among the dead right now, but I wish they [the council] help us buy a car for him so that he could commute from our house to his work because every time he uses his clutches I worry that he could trip over something and fall. He fell twice already.”

Tawfik gave up on the council and preferred to deal with a civil society organisation because he considered it more organised and it saved him from the humiliation at the council.

He said, “I suffered so much to get my pension. I went to the Army Rehabilitation Center several times and another hospital in Maadi… but I stopped because I don’t want to beg people to help me.”

Kassem believes that the media has stigmatised the revolutionary injured. He said, “we are depicted as exploiters, that everything is easy and accessible to us; free public transportation, free entry to governmental clubs and lavish compensations. On the contrary, some of us are intimidated to go to the council to acquire their rights.”

Throughout the last eight months, the injured and their families have been going back and forth between NCCMFI and other stakeholders to ask for better treatment. They demonstrated several times, but their concerns remain ignored.

Different groups representing the injured held a press conference on 15 September to discuss the escalating crisis of the injured and their families. They asked for the formation of a special committee to search for those who disappeared after the revolution, to draft articles in the constitution to protect the rights of the martyrs and the injured’s families and to form a new board for the council from the injured immediately.

They also demanded the resignation of Dr. Hosni Saber and the appointment of an independent official, the opportunity to travel abroad to receive proper medical treatment, transportation cards, exemption from university fees and jobs that suit their type of injuries.

H.B, a lawyer from a civil society organisation working on the case of the injured who spoke on condition of anonymity, agreed that NCCMFI might not be efficient. Nevertheless, she thinks that the injured have to understand the bureaucracy of the government.

She said, “the problem that faces many of the injured is that they lack the required papers to get a job for example. They do not have a paper that proves they finished their military service or they do not have a primary education certificate and consequently they cannot get the job that the government provided for them.”

The injured might differ on whether they got their rights from the council, but almost all of them are in agreement that the council’s treatment is condescending. Some of them want to dispense with the council, but their financial capacities are limited and they find themselves indebted to the council. They wish the government was more cooperative and appreciative of their sacrifices.

“Sometimes I wonder” said Abd El-Khalek “‘are they punishing us for sacrificing our blood for the sake of this country?’”