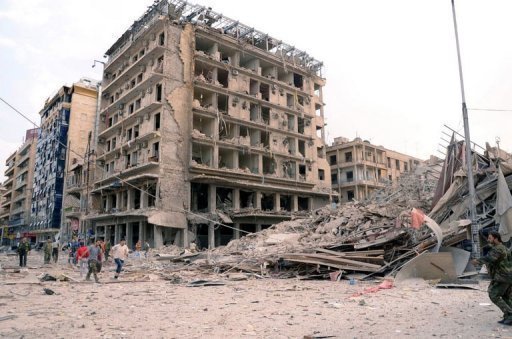 In parts of the capital, meanwhile, troops were deployed in large numbers and set up many more roadblocks than usual, AFP correspondents said, even as Syria peace envoy Lakhdar Brahimi readied a fresh bid to end the bloodshed.

Two car bombs exploded in quick succession around Aleppo’s Saadallah al-Jabiri Square near a military officers’ club and a hotel. A third bomb went off soon afterwards at the nearby Bab Jnein district at an entrance to the Old City, the Syrian Observatory for Human Rights and a military source said.

“A medical source said that at least 40 people were killed and 90 injured,” said the Britain-based Observatory. “Most of them were regime troops.”

The government blames the violence that has rocked Syria since March last year on “terrorists” it says are armed and sponsored by foreign powers.

Near the officers’ club, part of the facade of a hotel was destroyed by the force of the blasts, an AFP correspondent at the scene said, adding that a two-storey cafe collapsed completely.

“We heard two enormous explosions, as though the gates of hell were opening,” Hassan, a 30-year-old man who works in a nearby hotel, told AFP.

“I saw thick smoke, and I helped a woman on the pavement whose arms and legs were completely dislocated,” said Hassan, who gave only one name.

A shopowner whose store is located a block away from the officers’ club said: “I pulled out from the rubble a child less than 10 years old who has lost a leg.”

At least two buildings collapsed completely, and bloody corpses were laid out on the rubble, the footage showed.

“There are still people trapped under the rubble!” called out men in the square, as the channel showed people evacuating some of the victims.

The bombings were the deadliest in Syria’s raging civil war since August 28, when a car bomb targeted the funeral of two government loyalists in a Damascus suburb, also killing 27 people.

Bombings have increasingly become part of the unrest ravaging Syria, which began in March last year as peaceful protests for reform but has since morphed into an armed insurgency, with more than 31,000 people killed, according to activists.

Aleppo, with a population of 1.7 million people, has been one of the focal points of the conflict since mid-July, when the army promised the “mother of all battles” to clear the city of rebels.

In the past week the fighting has become more intense, spilling at the weekend into the centuries-old UNESCO-listed souk in the heart of Aleppo and sparking a fire that damaged hundreds of shops.

Pro-regime daily Al-Watan reported on Tuesday that extra troops were being sent to Aleppo.

“New reinforcements have arrived to support the army… and the armed men (rebels) are now fatigued and have begun to flee to their villages and towns in the province of Aleppo and elsewhere,” it said.

On July 18, rebels carried out a massive bombing on a complex in Damascus, killing four security chiefs, including Assad’s brother-in-law and the defence minister.

Regime forces have since pushed the rebels to a string of towns and neighbourhoods on the outskirts of the Damascus, many of which came under heavy bombardment on Tuesday, but they have lost control of several border crossings and are still battling to retake Aleppo.

The increased military deployment in the capital on Wednesday comes after the official daily Al-Baath reported that the “end of security operations throughout Damascus province” was approaching.

Government forces “have destroyed many weapons caches and seized large quantities of ammunition and equipment… which indicates that the end of security operations throughout Damascus province is approaching,” the newspaper said on Tuesday.

Officials said Brahimi, the UN-Arab League special envoy to Syria, is due back in the region this week to try to revive talks aimed at ending the bloodshed.

Jan Eliasson, deputy to the UN chief, said he did not know if Brahimi would be able to enter Syria, but hoped to persuade the Assad regime to “go in the direction of a reduction of violence.”