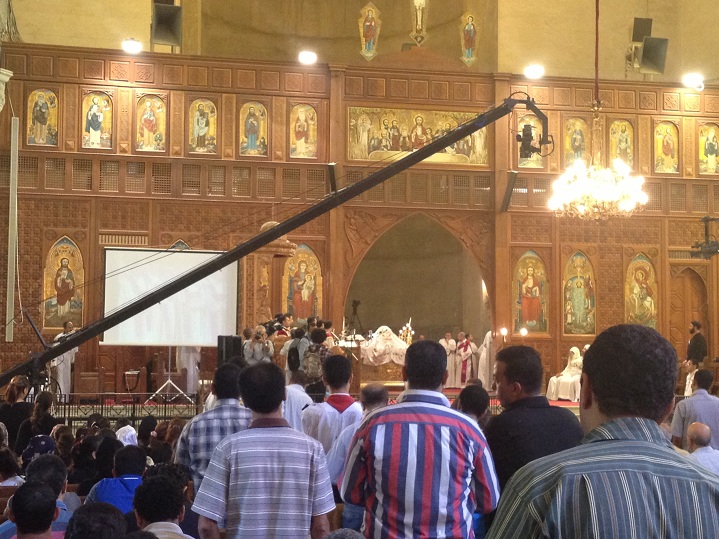 The Coptic Orthodox Church held a liturgy on Wednesday at St. Mark’s Cathedral in Abbaseya. The service commemorated the protesters who died almost a year ago on 9 October 2011 and marked the next phase of the selection of a new pope.

Banners with photos of the dead protesters were suspended over the entrance of the cathedral as grief-stricken family members, dressed in black, and other Christians filed in to take part in the liturgy attended by many high ranking church officials and headed by Metropolitan Pachomius of Beheira, the Church’s interim leader.

In his sermon, the senior spiritual leader touched upon both the matter of electing a new pope and the importance of remembering members of the church who had been unjustly killed.

Family members of the 28 who died in the Maspero massacre last year were in attendance, sitting as a group in the front of the cathedral. Women were donned in black, and many had pictures of lost loved ones.

“We meet today to remember our children who have died and walked in faith,” said Pachomius. “We remember them with our loved ones in Kosheh, Samalout, Imbaba, Al-Amraneya, and Nag Hammadi,” he added in reference to other incidents involving the death of innocent Christians. “They are martyrs of the era and we can not forget them. We live in a new era of martyrdom.”

He mentioned the Maspero victims saying, “We salute their memory before the Lord and we must remember the divine promise of sacrifice, and the blood of our martyrs will remain the power of our faith.”

Pachomius read aloud the names of all the victims as people in the cathedral bowed their heads in respect.

He also spoke about the importance of the papal selection process saying, “The Pope is the successor of Saint Mark, the father of all churches.” He also pointed out the Pope of the Coptic Church does not only represent his domination, but is a reflection of all Christians throughout the world, given his significant role as a successor to the see of Saint Mark.

Pachomius also thanked the heads of the other Egyptian’s Catholic and Evangelical churches which had observed the three days of fasting leading up to Wednesday’s liturgy and were in attendance.

“Partnership for choosing the Good Shepherd is of concern to all Christians and we thank all the denominations that participated in the prayer.”

Over the days leading up to the one-year anniversary on Tuesday the families have prepared ways to remember the tragedy. On Thursday the group travels to Alexandria to meet the families of 23 who died on 1 January 2011, when a bomb detonated outside the Saints Church, to attend a joint memorial in honour of all the victims. The Union of the Families of the Maspero Martyrs has planned an additional memorial at St. Mark’s Cathedral on the night of 9 October.

The union representing the families has announced that it will not formally participate in protests that will take place to commemorate the victims, maintaining that their observance of the anniversary would only be “spiritual in nature.” A wide range of groups including the Maspero Youth Union has planned peaceful protests on 9 October to call for the prosecution of high-ranking generals who were in power when the 28 protesters were killed. Most of the demonstrators who died were shot or run over by armoured vehicles.

A complaint was submitted by 24 families of victims last week and was transferred to the Public Prosecutor Abdel Meguid Mahmoud. Those who submitted the complaints expressed frustration that 11 months after protesters were killed, no action had been taken against any senior official.

An investigation will open to look into the involvement of former Field Marshall and head of the Supreme Council of the Armed Forces (SCAF) Mohamed Tantawi, along with his former Chief of Staff Sami Anan. A judge will also investigate the former head of police Hamdy Badeen and his successor Ibrahim Al-Domiaty for their role in the massacre.

On 9 October 2011 a large group of predominantly Christian protesters marched from the Cairo neighbourhood of Shubra and were confronted by the army near the state television and radio building, leading to an assault that left many Christian protesters dead. While SCAF conducted an investigation and claimed the army was not at fault, video and witnesses indicate that the army ran over many of the demonstrators with tanks.

Wednesday’s liturgy marked the end of a three-day church-wide fast in preparation for the next stage of the papal election process. On Thursday, the church’s electoral committee travels to Saint Bishoy Monastery in the Western desert, where the late Pope Shenouda III is buried. Over the next two weeks the committee will deliberate and narrow the list of 17 candidates down to between five and seven.

The papal nomination committee has received 15 appeals, according to Bishop Benjamin of Menoufiya in an interview to Coptic news agency Watani. During its retreat at the monastery, the committee will consider the appeals and many aspects of the 17 candidates when determining the five to seven set to move on. The submitted appeals will be considered, along with personal aspects of each candidate deemed fitting for the role of the next clergy member to occupy the papal throne.

In late November, around 2,500 Copts, both clergy and laymen, will vote and bring the final list of candidates down to three. On 2 December the Church will hold a liturgy at the cathedral in Abbaseya in which a blindfolded child will draw the name of the 118th Pope of the Coptic Orthodox Church. The current list of nominees includes seven bishops and ten monks.