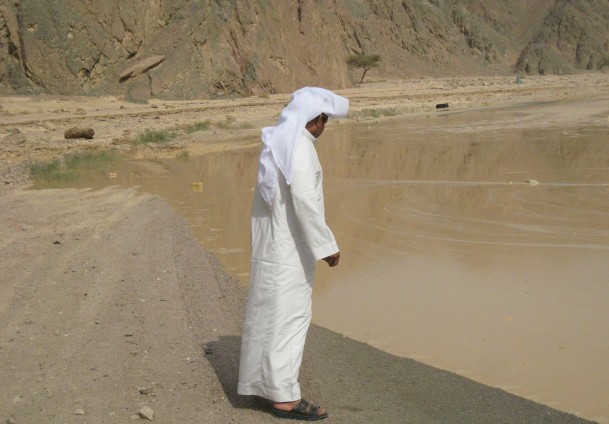 Nuweiba faced a new wave of minor floods on Wednesday night, but suffered no casualties.

Auda Eid El-Tarabeen, a resident of Nuweiba desert, said that the Nuweiba/Dahab road was re-opened after being blocked by the flood, which began in the Zaghra valley. The Taba/Nuweiba road was also blocked by the Wateer valley flood for four hours and then re-opened.

The city of Saint Catherine, located in South Sinai, saw another round of floods on the Al-Sa’al valley road, where the water level reached 50 cm, reached speeds of 60 km/h. The floods descended from the top of Saint Catherine Mountain, 2600 metres above sea level.

South Sinai governorate, in cooperation with the national research institute, used nine advanced flood intensity tools to forecast the flood 24 hours before it struck, according to a statement by General Adel Kassab, South Sinai director of crisis management.

Kassab confirmed that Egypt Telecom has set aside EGP 60 million to initiate a fibre line, manufactured from light fibres, between the cities of Nuweiba, Dahab and Saint Catherine.  A planned microwave system will connect Sharm El-Sheikh to Ras Ghareb and VSAT satellite station.

The heavy rains follow seven years of semi-drought in the Sinai. Residents await the rains every year, considering it a great blessing as it allows the growth of wild plants, one of the main sources of food for sheep, and provides water for large areas of agriculture.

Sinai was struck by heavy floods the winter of 2009, dividing its capital, Al-Areesh, into two parts and resulting in several fatalities. This forced the government to construct several bridges and to overhaul the dams protecting the city.