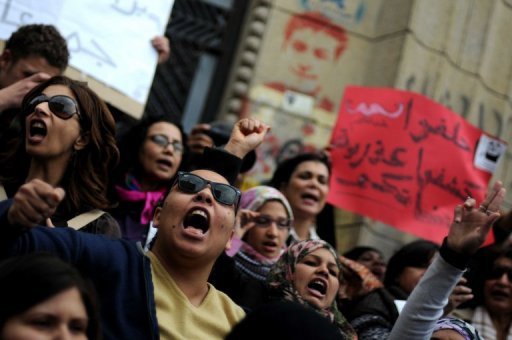 A protest to express opposition to the proposed article 36 of the constitution, currently being drafted by the Constituent Assembly, was held in front of the Presidential Palace on Thursday night.

According to the private independent ONA news agency, the protest included various groups such as representatives of political parties and women’s rights groups. They demanded that the constitution safeguard the rights of women and opposed article 36.

Article 36 has sparked a lot of controversy and this is only the latest protest to be held. The article states that the nation will take all the required executive and legislative steps to ensure that women are equal to men in all sectors including political, cultural, economic and social life, so long as this does not contradict the provisions of Shari’a law (Islamic Jurisprudence).  Many fear that the provisions of Shari’a are open to interpretation.

Among the protesters was Basil Adel, former member of the dissolved People’s Assembly, who tweeted during the protest saying, “the Constituent Assembly should disclose how it really views women rather than hide behind article 36 !!!!”

“A man may not have a mother, a lover, or a sister, but he still needs to deal with a full fledged human being!!! Her rights are legitimate, inherited and societal rights that are not linked with men,” he added.

On Tuesday, another protest was held outside the Shura Council. The protesters were demanding equal rights for women as well as opposing the controversial article. Many protesters held placards reading, “No, to article 36.”

Dozens of organisations and political parties have expressed concern over the article.

Among them is the National Council for Women, which on Tuesday rejected articles that restrict freedoms, especially article 36. The council demanded a fair constitution and said that in its current form article 36 avoids the principles of full citizenship and equality without discrimination. It added that the article does not oblige the state to fight discrimination or consider it a crime, and that it goes against international agreements to which Egypt is signatory.

An online petition signed by several parties was created in opposition to the proposed article.