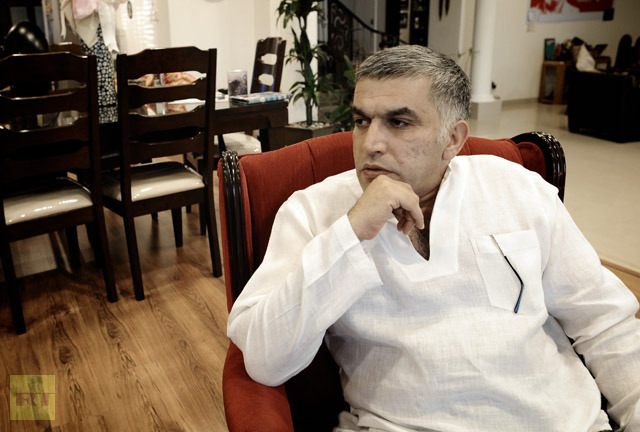 After being denied the right to attend the condolences service of his mother who passed away last week, a prominent Bahrain human rights defender started a dry hunger strike.

Rajab attended the condolence service on 4 October, but was not allowed to attend it on 5 and 6 October, which is what prompted him to start the hunger strike on Friday, 5 October.

A prominent Bahraini rights defender, Said Yousif Al-Muhafda, who has himself been harassed by the regime, said on Saturday, “since Rajab called and announced that he will start the hunger strike, there is no more news of him. However, he sounded very weak and tired because he has refrained from taking medicine, food and water and he needs medication because he has high blood pressure.”

Al-Muhafda, who is the head of monitoring and follow up at the BCHR, said that a protest is planned for Rajab on Saturday night.

According to the joint statement, Rajab was allowed to attend the condolence gathering on Thursday but while on temporary release made a speech attacking the regime. Rajab thanked everyone who attended the service and said that his mother died heartbroken over wanting to see him.

“But unfortunately, the unjust regime got in the way between me and my mother in her last moments. But my request and my mother’s request for this generous people is not to back down. We have a right and we have principles,” he said in a video released by Daih News service.

“This is an authoritarian regime and this is an unjust regime. We have a legitimate, ethical and moral duty to fight the injustice and the tyranny,” he added. Rajab additionally urged all Bahrainis to take part in protests to defend their rights and dignity. Rajab said that he follows all the news of the protests from behind bars.

Following his speech, an official in the prosecution told the state-run Bahrain News Agency said that despite being allowed to attend the funeral for humanitarian purposes, Rajab broke the law to give a provocative speech. He added that the speech encouraged people to take part in illegal protests and to break the law.

Rajab is currently serving a three-year prison sentence after being found guilty on three charges of taking part in an illegal gathering.

The BCHR and the GCHR urged the United States, United Kingdom and European Union and human rights organisations to call for the immediate release of Rajab and other prisoners of conscience and for charges against them to be dropped.

Rajab’s hunger strike is the latest incident in ongoing tensions between the Bahraini kingdom and human rights defenders. Protests started in Bahrain on 14 February 2011, inspired by similar protests in Tunisia and Egypt which brought down the regimes there. The protests were suppressed forcefully and protesters were subjected to arbitrary arrests and torture.

The deteriorating human rights situation in Bahrain has been discussed in the US and UK parliaments. The Bahraini King formed the Bahrain Independent Commission of Inquiry (BICI) last year. It was chaired by Mahmoud Cherif Bassiouni, an Egyptian international human rights, criminal and humanitarian law professor. It offered recommendations for Bahrain to follow in order to improve human rights.

The implementation of the recommendations of the BICI report was discussed in the US Congress in August. Prominent Bahraini rights activists went to the UK where they delivered a speech on the Bahraini human rights situation at the House of Lords in late August.