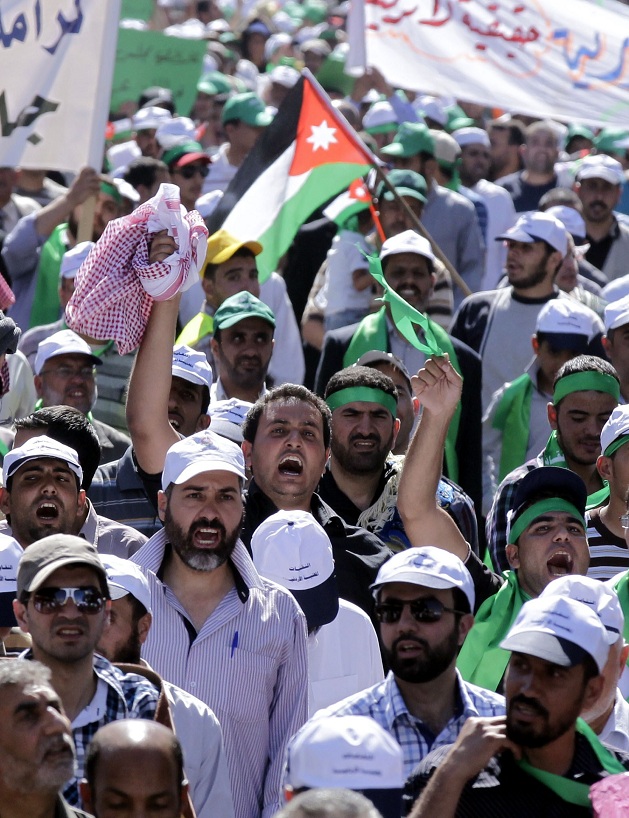 “We demand constitutional reform before the people revolt. The people want to reform the regime,” they chanted in the demonstration held outside Al-Husseini mosque in downtown Amman.

Police said they prevented a group of youths from attacking the demonstrators, after they arrested eight people who were found to be carrying firearms in three minibuses heading into central Amman.

“We have been protesting for more than 20 months and you still do not understand our demands. We do not like demonstrations but we love Jordan,” read another banner carried by the protesters.

The demonstration was the latest in a series of protests in Jordan since January 2011 to call for political and economic reforms and to demand an end to corruption.

“We demand genuine constitutional reform that would help empower the Jordanian people,” Hammam Said, leader of the Muslim Brotherhood in Jordan, told the demonstrators.

“We will not take part in the elections because we demand parliamentary governments and a real parliament.”

The king decided to dissolve the chamber of deputies on Thursday and to call early elections, the royal palace said. It gave no date, although the monarch has said he wants polls to be held by the end of 2012.

But the opposition Muslim Brotherhood decided to go ahead with its planned rally in central Amman after Friday prayers, with the group hoping for a turnout of 50,000 supporters.

“Obviously this demonstration represented no one but the Muslim Brotherhood,” Information Minister and government spokesman Samih Maaytah told AFP.

“If this was the best gathering they could come up with, then the Islamists should really consider taking part in elections and join parliament to seek reform there instead of on the streets.”

A rival demonstration in support of the king’s plans was “postponed indefinitely … to avoid any problems,” said an organiser, Jihad Al-Sheik.

The Brotherhood has said it would boycott polling as it did Jordan’s last elections in 2010 to protest a lack of meaningful reforms. It demands a parliamentary system where the premier is elected rather than named by the king.

“I am telling the Muslim Brotherhood that they are making a tremendous miscalculation” with their threat to boycott, the king told AFP in an interview last month.

“This elections law is not perfect. We all understand that. But there is no better consensus on an alternative. What is critical is that we keep going forward,” the king said.

“So I am telling the Muslim Brotherhood, you have a choice. To stay in the street or to help build the new democratic Jordan.”

The Islamists boycotted the last elections in protest at constituency boundaries, saying they over-represented loyalist rural areas at the expense of urban areas seen as Islamist strongholds.