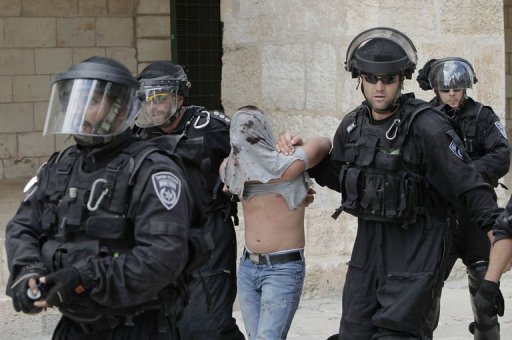 “Several hundred worshippers threw stones at police who were stationed at the Mughrabi Gate, forcing them to go onto the plaza and push them towards the middle,” police spokeswoman Luba Samri told AFP.

Police and and an AFP correspondent said the forces had used sound bombs to disperse the crowds when people began throwing stones after the end of the weekly Friday prayers.

The scuffles broke out after days of tension at the compound, which is referred to as the Temple Mount by Jews and Haram al-Sharif by Muslims.

On Thursday, police arrested nine people. Five were Arab Israelis, who were accused of threatening Jewish and Christian visitors to the site, and four Israeli Jews, three of them rightwing activists who tried to force their way onto the plaza.

Another three Arabs and two Jews were arrested on Tuesday for disturbing the peace and attacking police at the compound.

Tensions have been running high over a series of visits to the compound by rightwing Jewish activists during the week-long Jewish holiday of Sukkot, which began at sundown on Sunday.

The compound houses both the Dome of the Rock and Al-Aqsa mosques, and is venerated by Jews as the site where King Herod’s temple stood before it was destroyed by the Romans in 70 AD.

It is one of the most sensitive sites in Jerusalem, and clashes frequently break out between Palestinians and Israeli security forces at the compound.