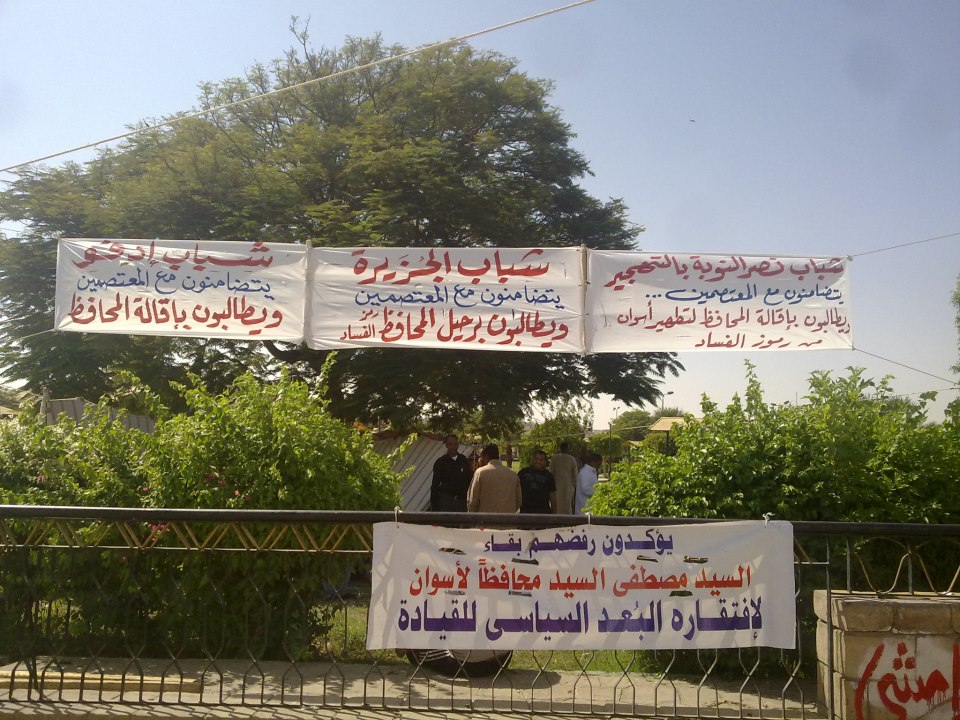 President Mohamed Morsy’s 100 days have not yet started in Aswan, a protester demanding the resignation of the province’s governor told the media on Sunday.

“I hereby send a message to president Morsy,” Al-Wasat Party representative in Aswan Islam Osama said, “the hundred days have not yet started in Aswan.” Osama was referring to Morsy’s first hundred days in power, due to be over within a few days.

The announcement came at a press conference held at the headquarters of the Egyptian Current party on Sunday, where Aswan protesters addressed the media for the first time since starting an ongoing sit-in 20 days ago, demanding the resignation of the Aswan Governor Mustafa Al-Sayed.

“Amid complete disregard from the political leadership, the youth have revolted against the terrible circumstances the government of Aswan is suffering from, caused by Governor Al-Sayed,” a statement released during the press conference read.

The protests, which started almost three weeks ago, have been insistent on a single demand; the resignation of Al-Sayed for his involvement in several corruption cases which go back long before the January 25 revolution and extend beyond.

The protesters pointed to several lawsuits filed against the governor since he came to power; a total of over 60 reports, according to lawyer and Revolution Youth Coalition in Aswan spokesperson, Wael Ref’at. Ref’at said that while some of the reports progressed to court, others were still being investigated by the public prosecutor or the attorney general.

“The abundance of reports filed is but a reflection of the deteriorating situation in Aswan,” Ref’at said, adding that the reports concerned different topics reflecting the wide spectrum of problems facing Egypt’s southern-most governorate. Reports have also been filed by Al-Sayed against the protesters, which they claim are “maliciously” motivated.

Among the issues included in the reports is the aftermath of the January 2010 Aswan floods. Nobody knows how the donations collected for floods’ victims were spent, according to Ref’at. Some of the victims filed a report against the governor demanding a bill detailing where donations had gone.

He also alleged that those who were given alternative housing were threatened that the facilities would be taken from them “if they didn’t organise protests supporting the governor to counter the sit-in. The victims had no choice but to comply.”

Other complaints included in the statement included the lack of a fully equipped hospital in the governorate, the absence of proper infrastructure, the discharge of sewage in the Nile and ongoing power cuts despite the presence of the High Dam.

The protesters claimed during the press conference that when they approached Muslim Brotherhood members and members of the Freedom and Justice party (FJP) with their demand for the dismissal the governor, they responded that their demand could not be met because it would make president Mohamed Morsy look bad for having renewed Al-Sayed’s term as a governor.

The sit-in, which involves around 300 protesters including women, has been repeatedly attacked by thugs, according to Osama

Al-Sayed has been the governor of Aswan since 2008 and was appointed by Mubarak during Ahmad Nazif’s cabinet and has served in four subsequent cabinets.