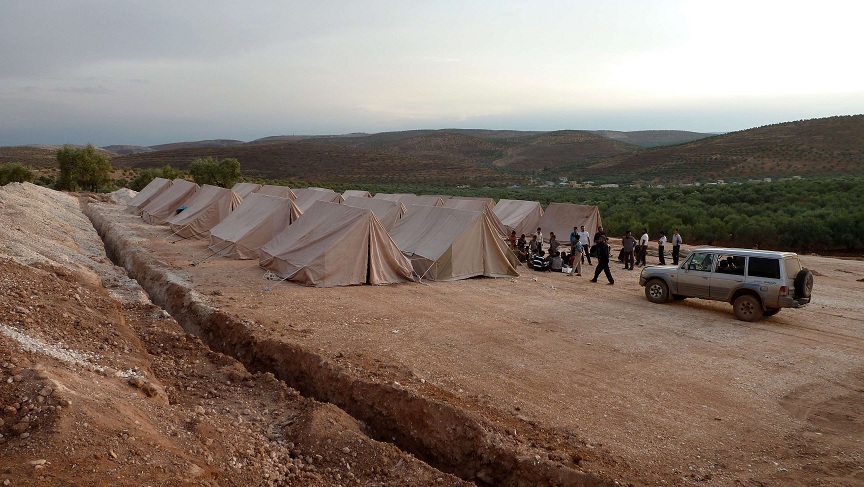 Qah, Syria (AFP) — Bulldozers level the ground and volunteers brave stormy winds to erect tent by tent what engineers say is the first initiative to build a refugee camp inside war-torn Syrian territory.

Contractors say it will be the biggest camp for displaced Syrians in the country, and it is being built near the Turkish border in the northwest village of Qah where thousands fleeing the war will begin to live from Sunday.

Many are currently camping out in schools or staying with relatives, the poorest even living among olive groves in the region of Atme, a Syrian rebel rear base along the frontier.

“I was struck by the plight of these displaced” people, says Sheikh Omar Rahman, a 30-year-old imam who has been involved in the project and is set to be the future director of the camp.

Together with the fundraising activities of several locals who support the revolution against President Bashar Al-Assad’s regime, Sheikh Omar managed to raise the initial money.

“This project is a local initiative carried out with the financial support of donors from Libya,” he says, but adds that “all contributions are welcome.”

Construction began just ten days ago by the side of a rocky hill on the outskirts of Qah, which neighbours Atme.

Almost 40,000 square metres (nearly 10 acres) of agricultural land has been bought from farmers, and olive trees have been uprooted to make way for bulldozers and earth-moving machines, and toilets and showers installed.

While the site is not yet completely ready, the first beige canvas tents were set up on Saturday by a stream of young villagers, despite strong winds and intermittent storms.

“We are working hard as winter will set in and the rain has already come. Within a week everything must be done,” says Hassan al-Atrash, who is associated with the project.

Atrash fled two months ago from his architectural firm in Aleppo, the northern Syrian city which has been a fierce battleground for more than two months between regime forces and rebels, to take refuge in his old country house in Atme.

“This camp is very important to help refugees live decently and spend the winter in,” says Atrash, adding that it was the first initiative of its kind on Syrian territory.

Security at the camp will be provided by members of the Martyrs of Al-Ariyeh brigade which is made up of Qah villagers and headed by one Abu Kharqo.

“The main problem will be to manage the armed men who come to visit their families,” the commander says.

The closest Syrian troops are around 30 kilometres (18 miles) from the camp, meaning there is little threat of artillery shelling.

The chances of air raids by regime warplanes are also low given the proximity of the camp to the Turkish border. But as a precaution heavy machineguns will be deployed on high ground near the camp.

“If required, (additional) neighbouring land will be bought. We can accommodate up to 10,000 displaced people,” says the imam, who has also been promised aid by the main opposition the Syrian National Council.

For local Sunnis fully devoted to the cause of a “Free Syria,” it is natural to express solidarity also with families from the neighbouring provinces such as Idlib whose members are often fighting for the rebellion in their region.

“It is important that our fighters ensure their families’ safety,” says Sheikh Rahman.

“On paper the plan is to facilitate the transit of Syrian refugees to Turkey.”

More than 100,000 Syrians have sought refuge in neighbouring Turkey, according to official figures supplied by Ankara.

“But few people can now travel to Turkey,” says Sheikh Rahman, as the Turkish military has significantly strengthened its border surveillance.

“At least these exiles will be hosted in their own country with some dignity.”