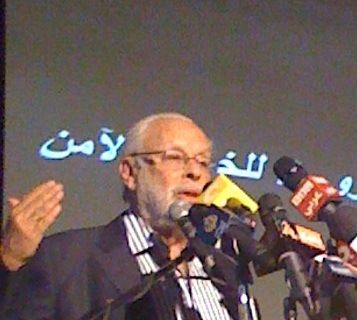 Sameh Saad, lawyer for Maspero Youth Union announced on Sunday that the Union is filing a lawsuit against members of the Supreme Council of Armed Forces (SCAF) for the murder of protesters in Maspero on 9 October 2011.

The lawsuit is against former Field Marshall and head of the SCAF Mohamed Tantawi, along with his former Chief of Staff Sami Anan, the former head of military police Hamdy Badeen and former commander of the central military zone Hassan el Reweiny. The document excludes current military police head, Ibrahim El-Domiaty as he is still in service.

The announcement was made in a press conference held on Sunday by Maspero Youth Union along with 33 other revolutionary movements and political parties at Al-Sawy Cultural Wheel. The event was organised to commemorate Maspero victims and announce a funeral march on Tuesday demanding the prosecution of SCAF generals.

Saad read the document, which will be presented to the general prosecutor on Monday, to the audience and said that it will be accompanied by a CD with 16 videos.

Mina Magdy, member of the political bureau of Maspero Youth Union, said the march will start at 4 pm on Tuesday from Shubra square, commonly known as Dawaran Shubra, and will stop at the Maspero area;  the same route taken by protesters a year ago.

Magdy went on to explain that the march will be followed by a protest in simulation of the events of 9 October 2011, demanding the prosecution of those involved in murdering the protesters, most of whom were shot or run over by armoured vehicles.

“There will be no party logos or chants, just like the revolution, all united for one cause, the rights of the martyrs” Magdy said.

The march will arrive at Maspero by 6:30 pm and be received by human chains from various political parties. They will show a documentary about Mina Danial prepared by Kazeboon movement, which was established to expose the lies of the military officials.

Magdy also denounced the media coverage of the event; he read to the audience a story published in a local newspaper that said the protesters were planning to break into the state radio and television building on Tuesday; an accusation strongly denied by Magdy who stressed the peacefulness of the protests.

He added that the presidency and the Ministry of Interior were notified about the protests, “they didn’t show any sign of opposition to the protests as long as they maintain the peaceful nature” Magdy said.

Next to speak was Ahmed Ragheb, lawyer and legal researcher, who suggested a draft revolutionary justice law instead of the present legal system designed to serve former president Mubarak’s regime.

He also demanded the annulment of Decree 45 of 2011, issued by the SCAF, that states military officials can only be trialed by military courts, even after retirement.

“Those who dream of a safe exit should know there is no such thing” said George Isak, a leader at Al-Dostor party. He said the union should file a lawsuit against state media for being misleading and hypocritical.

He also said that martyrs sacrificed their lives so we could have a constitution that represents all Egyptians, one that could be voted on section by section.

Mostafa El-Guindi, a prominent former member of parliament and a member of the Popular Current said that he was advised not to attend the conference, for fears of sectarian strife, but he insisted on attending to support those who were oppressed.

“I say to Morsy, you know well who murdered those protesters and they should be punished; and the new constitution will be inspired by the spirit of Emad Effat and Mina Danial” El-Guindi said, referring to two of the most famous victims of military crackdowns.

On 9 October 2011, Coptic Christians along with some Muslims protested against an attack on a church in Aswan. Military forces confronted them at the Maspero area, near the state radio and television building, at least 24 protesters were killed and 329 were injured in the clashes.