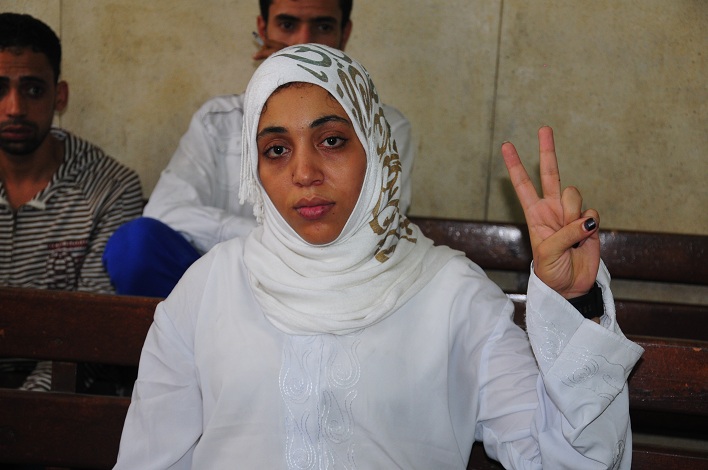 The families of detained protesters claim police tortured their sons during the four months they have been on trial.

The North Cairo Elementary Court has postponed the trial of a group of detainees charged with attempting to break into the High Court building in downtown Cairo.

NahedSherif, Mohamed Atef, Osama Sabri, and Kamal Mohamed were all arrested during a sit-in on 6 June and charged with assaulting police, terrorising citizens and attempting to burn down the High Court building. All face potential prison sentences of up to two years.

The trial had its fifth hearing on Sunday in Abbaseya, with family members of the charged and other supporters attending.

Sabri Hussein, father of Osama Sabri, said no one in the family knew where his son was until four days after his arrest. After he finally managed to reach his son, Sabri told his father that he was beaten and tortured in Al-Azbakeya police station.

Nagla Ahmed, mother of Mohamed Atef, claimed her son has been tortured and humiliated during his detention, alleging he was forced to drink soapy water and strip naked in front of security forces at Al-Qanatar prison. She also claimed her son had been repeatedly beaten by guards since being detained.

“He was downtown on the first day of the revolution,” said Hussein referring to his son. “When [former Minister of State for Antiquities Affairs] Zahi Hawass said that people were stealing from the museum, he went down to protect it.” Hussein attended court on Sunday holding a photo of state newspaper Al-Ahram’s front cover showing youth protecting the museum in Tahrir Square, his son included.

Family members attending the trial maintained their children were active peaceful protesters during Egypt’s revolution and had never had previous problems with the law or histories of violence.

Outside the court, a small group called the Campaign for the Liberation of Prisoners of the Revolution staged a sit-in calling for official pardons for the accused. Protesters held signs with the names of the accused along with names of other detainees under the banner of “revolutionaries not thugs.”

In his 6 October address at Cairo Stadium on Saturday, President Mohamed Morsy claimed most of Egypt’s revolutionaries had been released from detention and promised that soon more would be let out.

However Hussein expressed skepticism that the promise would come to fruition, claiming most of the prisoners that had been released on Saturday to commemorate the national holiday were not revolutionaries who had been arrested during the uprising.

On 6 June, activists outside the High Court building were demonstrating against the eligibility of former presidential candidate Ahmed Shafiq and for an independent judiciary when they were allegedly assaulted by a group of unknown men.

The attackers set fire to tents outside the courthouse and the building sustained damage. Sherif, Atef, Sabri, and Mohamed were all arrested along with three judges Ahmed Al-Shafei, Mohamed Al-Morshedy, and Karim Mohamed Ahmed.