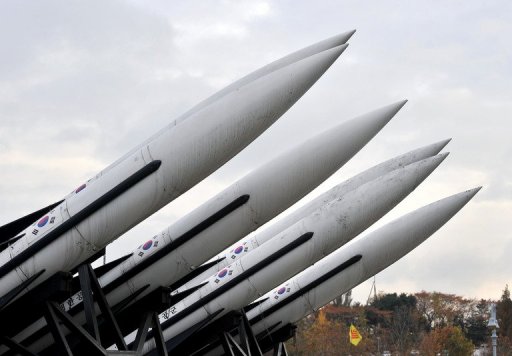 SEOUL — South Korea (AFP) Sunday announced a deal with the United States to almost triple the range of its missiles to cover the whole of North Korea — a move likely to infuriate Pyongyang.

The agreement will allow the South to deploy missiles with a range of 800 kilometres (500 miles), up from the current limit of 300 kilometres, National Security Adviser Chun Yung-Woo told reporters.

“The biggest purpose of the revision is curbing military provocations by North Korea,” Chun said.

The extension will not only bring the whole of North Korea within reach of Seoul’s rockets, but also parts of China and Japan.

The US stations 28,500 troops in South Korea and guarantees a nuclear “umbrella” in case of any atomic attack. In return, Seoul accepts limits on its missile capabilities.

An agreement signed with the US in 2001 — the year South Korea joined the Missile Technology Control Regime (MTCR) — restricted Seoul to rockets with a range of 300 kilometres and a payload of 500 kilograms (1,100 pounds).

Given the ambitions of nuclear-armed North Korea’s own missile programme, the South has long argued for the limits to be extended. Negotiations took on a new urgency after the North’s failed rocket launch in April.

Pyongyang insisted its aim was to put a satellite into orbit, but the US and its allies saw the attempted launch as a disguised long-range missile test banned under UN resolutions.

Chun said the new deal, which will take the range of South Korea’s missiles well beyond MTCR limits, was aimed at “securing a more comprehensive response to missile threats” by the North.

Seoul believes Pyongyang has 1,000 missiles of various types, many of them targeted at the capital or other locations in the South.

The maximum payload for the maximum 800-kilometre range will remain at 500 kilograms, but Chun stressed the two parameters were inversely linked, so that for shorter ranges corresponding payload increases would be allowed.

A 500-kilogram warhead would be powerful enough to destroy or damage the equivalent of several dozen soccer stadiums at one time, Shin Won-Sik, a Seoul defence ministry official, told reporters.

“The new deal…will give a strong warning that the North should stop recklessly developing weapons of mass destruction and instead spend more money to feed its own people,” Shin said.

There was no immediate comment from the US State Department, but Washington has previously made it clear it considers South Korea a special proliferation case, given the threat posed by the North.

In June, senior US non-proliferation official Vann Van Diepen said the standards of the MTCR — an informal club of 34 largely Western countries — had to be balanced against members’ “legitimate defence requirements”.

“Clearly South Korea has some distinguishing features in terms of the threat it faces from North Korea that clearly have to be taken into account,” Van Diepen said.

But analysts warned the new deal may accelerate an arms race in northeast Asia and weaken Seoul’s arguments against the North’s nuclear and missile programmes.

“The South certainly has every right to defend itself from threats of the North,” said Yang Moo-Jin of the University of North Korean Studies in Seoul.

“But the deal is really a double-edged sword and goes against the wider global efforts to reduce weapons of mass destruction,” Yang told AFP.

He also suggested it could strengthen a “vicious circle” in which the communist North uses the deal as another excuse to stiffen its resistance to calls to halt its nuclear programme.

Six-party talks on the North’s nuclear disarmament — which group the two Koreas, the US, China, Japan and Russia — have been at a standstill since the last meeting in December 2008.

In April 2009, the North formally abandoned the process and it conducted its second nuclear test a month later.

North and South Korea have remained technically at war since the 1950-53 Korean War ended with an armistice rather than a peace treaty.