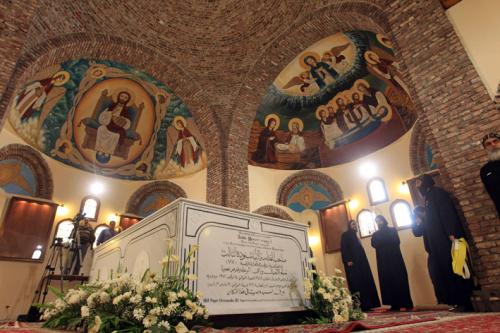 will be delayed for two days due to a scheduling conflict of three members of its selection committee who are also Constituent Assembly members.

Bishop Paul of Tanta, Judge Edward Ghaleb, and lawyer Monsef Suleiman who are the church’s representatives in the Constituent Assembly, had assembly commitments on Tuesday and Wednesday that prevented them from joining the papal election committee. The delay is not expected to affect later stages of the process.

The Papal election committee, made of both clergy and laypeople, traveled to the Monastery of Saint Bishoy in Wadi El Natroun, where the late Pope Shenouda III is buried, to select the papal candidates that will move on to the next stage. During the two week retreat, the committee will consider the various qualifications of the 17 nominees and examine the appeals lodged against them. Following the retreat, the committee will announce between five and seven candidates that it deems most qualified for the post of the 118th Pope of the Coptic Orthodox Church of Alexandria.

In late November, roughly 2,500 Coptic voters from all over the world will choose from the candidates nominated by the committee, narrowing the field to three.

On 2 December, the church will hold a liturgy at St Mark’s Cathedral in Abaseyya, in which a blindfolded child will randomly select one of the three candidates, who will then be named pope.

A pending lawsuit against the Church is calling for the suspension of papal elections, claiming the current voter list is not a fair representation of the Coptic congregation, demanding that the list be expanded to include more voters. Lawyer Naguib Gabriel dismissed the possibility that the case would result in concrete action, claiming that a civil case would not have legitimate authority over internal canon law.

The Church held a three day community-wide fast preceding the retreat to the monastery, concluded by a service at the cathedral in which it honoured the families of the Maspero massacre victims, almost one year after the army responded to a predominantly Christian protest with brute force.