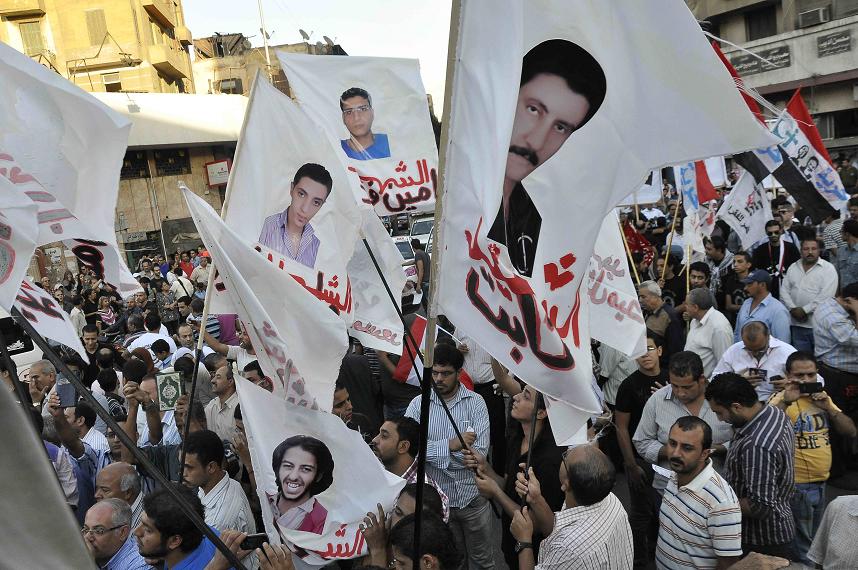 Thousands of protesters marched to the state television and radio building on Tuesday afternoon, marking the one-year anniversary of the Maspero massacre.

Many of the demonstrators met in the neighbourhood of Shubra before marching to Maspero, following the route a predominantly Christian protest took on 9 October 2011 in response to the burning of a church in Aswan. At this march last year, 27 protesters were killed by the armed forces

Protesters held signs demanding the prosecution of high-ranking military officials, including former Field Marshal Mohamed Tantawi, former Chief of Staff Sami Anan, and former Chief of Police Hamdy Badeen. Marchers hoisted posters with their heads surrounded by nooses with the slogan “the ruling of the people” written underneath.

Other signs read, “prosecution of the generals.” Ayman, a protester holding up a large wooden cross said, “we are here to remember the blood of the martyrs.” When asked what needed to be done, he replied “listen for yourself,” as the chant “down with military rule” echoed behind him.

A sea of placards displayed the faces of those killed a year ago. Two giant flags stood out, one depicting the face of Mina Danial, an activist killed during the massacre, and the other depicting a crescent and a cross in the colours of the Egyptian flag.

Protesters played music and beat drums as they marched. Christians and Muslims marched together in solidarity. As they chanted, “we’ll get their rights or die like them.”

A number of movements and coalitions announced their participation in the march. The Maspero Youth Union, a group that has responded to various issues of Egyptian Christian rights, brought a strong presence to the demonstrations, while 6 April Youth Coalition, a group which participated heavily in the revolution, also announced its participation in the march from Shubra and said it would be present at Maspero. Flags from the youth coalition were present at Maspero on Tuesday night.

Salafayo Costa, a Salafi group known for its relative open mindedness emphasis on coexistence, marched from Qasr Al-Nil Bridge and joined other demonstrators in Maspero. As the group marched towards its destination, they held up signs of their logo, altered feature Danial.

“There aren’t just Christians here. We’re here too to stand with them after what happened last year,” said Omar, a 17 year old member

As the protesters reached the state television and radio building, where there was minimal security presence, they continued chanting and sang patriotic songs, led by various leaders from a stage on the back of a truck. The protesters accused the Muslim Brotherhood Supreme Guide Mohamed Badie and President Mohamed Morsy of “stealing the revolution” and turning a blind eye to crimes committed by SCAF.

The people who were present then watched a compilation of videos from the massacre, eyewitness accounts, and reactions from various political figures.

In September, three soldiers were convicted for the manslaughter of 14 people during the massacre. Two were sentenced to two years in jail, while the third was given three years. These are the only convictions relating to the Maspero massacre to date.

Families of the Maspero massacre victims have filed complains against Tantawi, Anan, and Badeen, pointing out that a year after protesters were killed, no senior military officials had been subject to prosecution.