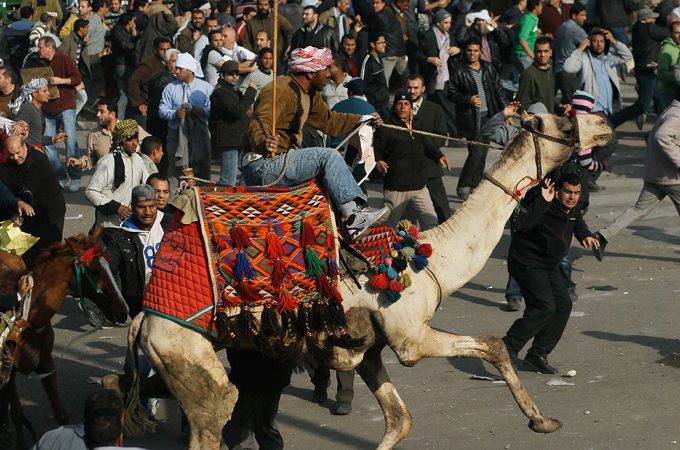 Cairo Criminal Court has acquitted all those accused in the case of killing of protesters on 2 February 2011, widely known as the Battle of the Camel. The defendants included 24 former regime figures, parliamentarians, and members of the dissolved former ruling National Democratic Party; including Dr Fathi Sorour, head of the ex-People’s Assembly, Safwat Al-Sharif, head of the ex-Shura Council, ex-secretary general of the NDP and businessman, Mohamed Aboul Enein, also a parliamentarian. In addition, ex-military production minister, Mohamed Al-Ghamrawy,  lawyer Mourtada Mansour and his son, as well as ex-minister of manpower and immigration, Aisha Abdul Hady, businessman and member of the general secretariat of the NDP, Ibrahim Kamel, and several other parliamentarians and prominent NDP figures.

The Battle of the Camel was an episode during the 18 day protests in Tahrir Square, 2011. Protesters were attacked by people on camels and horses armed with sticks who tried to disperse the crowds in Tahrir, leaving 11 dead and over 600 injured.

This ruling comes as a shock to Egyptians and is the most concerning in a long line of acquittals of those charged with killing protesters during the 18 day revolution.

Topics: acquittal Battle of the Camel