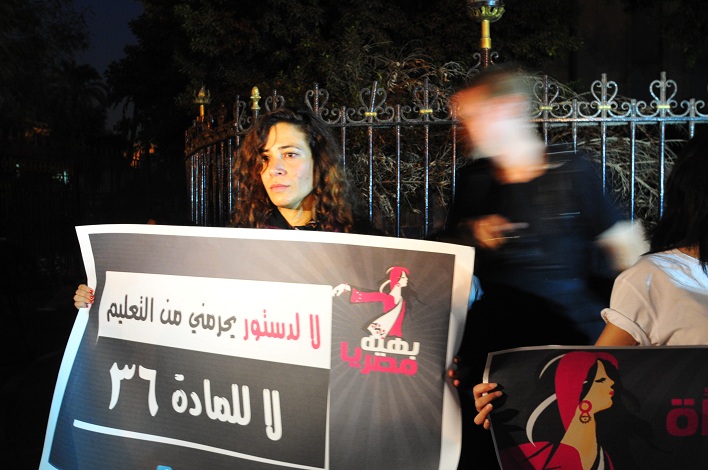 A group of political groups are calling on Egyptians to protest on Friday to demand a constitution which represents all Egyptians.

The march will be to call for a constitution representative of the demands of the 25 January  revolution.

A coordinator of the National Association for Change and Al-Dostor party member, Mohamed Khamis, said the marches will start after Friday prayers, departing from five different locations across Cairo and expected to converge on Tahrir square later in the afternoon.

“We demand dissolving the Constituent Assembly and reforming it based on set criteria,” Khamis said. “We also call for achieving the demands of the January 25 revolution; security, bread and social justice.”

The march has been called for by a wide variety of movements and parties, a matter which reflects upon the wide spectrum of demands, according to Egyptian Social Democratic Party (ESDP) leader Farid Zahran.

“The demands of the march range from social justice to syndicates’ freedom, reforming the Constituent Assembly and reservations on the outcome of [President Mohamed Morsy’s] 100 day programme,” Zahran said.

“The ESDP adopts all the aforementioned demands, reforming the Constituent Assembly being on top,” Zahran said.

“The Constituent Assembly suffers from a constitutional distortion… representation in it being dominated by a single political movement,” Hussein Abdel Razeq, a leftist Taggamu party leader, said. “Add to that the leaked articles currently being drafted by the assembly whose nature suggests that the drafted constitution is not one of a modern, civilian democracy but a semi-religious autocracy.”

Abdel Razeq said Taggamu party members in the now dissolved Peoples’ Assembly boycotted the assembly’s session in which the Constituent Assembly was formed.

Other movements and parties calling for the march include: Al-Dostor party; the Democratic Revolutionary Coalition; April 6 movement Democratic Front; the Second Revolution of Anger movement; the Coalition of Egypt’s Revolutionaries; and the National Committee for Protecting Freedom of Expression.

The Free Egyptians party would most likely take part in the march, according to the party’s spokesperson Ahmed Khairy. “The constitution is one of the most important problems Egypt is currently facing,” Khairy said, adding that solving the constitution’s problem would help resolve a large portion of Egypt’s problems.

Al-Wafd party had not announced an official stance towards the march to Tahrir Square, according to its board member Margaret Azer.

Several opposition movements and parties have been postponing any Friday protests until the end of Morsy’s first 100 days in power. In a speech addressing the people during the anniversary of the 6 October victory, Morsy claimed that around 80 per cent of the goals set for his first 100 days have been achieved. However, Morsi Meter, a website monitoring Morsy’s performance, claimed that a maximum of 15 per cent of the president’s promises were met.