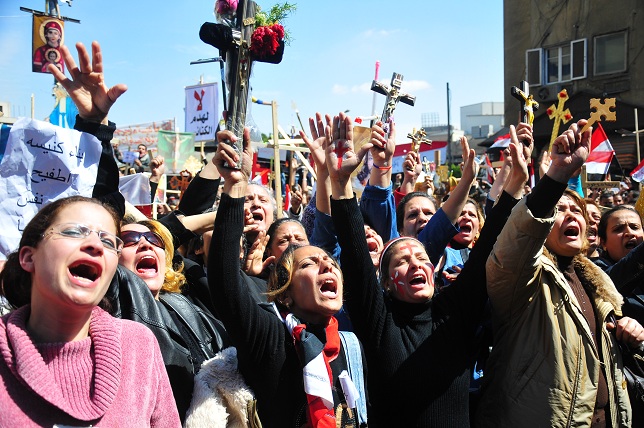 Both foreign and Egyptian human rights groups marked the one year anniversary of the Maspero massacre with statements condemning government inaction and recommending ways to respond to the killing of protesters last year.

The Egypt Initiative for Human Rights (EIPR) issued a report and press release calling for members of the Supreme Council of the Armed Forces (SCAF) and senior leaders of the military police to be investigated and prosecuted.

The report, Copts Under Military Rule, outlines sectarian incidents targeting Egyptian Christians in the months following the revolution. Incidents covered include the recent destruction of the church in Rafah, the clashes in Imbaba and attacks in Manshiyet Nasser.

“[SCAF] did not have a clear and complete vision to deal with the issue of sectarian tension and violence,” the conclusion of the report reads. “It did not seem to possess a real will to develop fundamental solutions, and therefore did not use legislative power to address the problem of building churches or discriminatory practices in society.”

The report was split into three parts. The first discussed sectarian violence committed under military rule, the second provides a review of violations committed by military police, and the third claims the junta poorly managed sectarian crises. For the third part, EIPR cited SCAF caving to pressure when protests were staged after a Copt was initially appointed governor of Qena.

EIPR recommended that SCAF members be prosecuted for killing protesters and for their “failure to fulfil their role in preserving the lives of citizens.” The organisation also said the government should compensate victims of sectarian incidents and their families for losses.

The report additionally calls for the government to facilitate the construction and repair of churches in a manner that does not violate the Universal Declaration of Human Rights, citing the obligation the government possesses to protect freedom of religion and worship.

The Egyptian Organisation for Human Rights (EOHR) “renewed its demand for the immediate trial of the perpetrators and ensures the right for peaceful demonstration.” The group accused security forces of indiscriminate killing and serious assault. EOHR recounted a fact-finding mission it launched last year that led them to call for an independent commission to investigate the killings and to move swiftly with referring senior military officials to court.

Earlier this month Amnesty International released a report demanding more protection of human rights in Egypt. The report dedicated an entire section to the Maspero massacre, containing eyewitness accounts of the night of 9 October 2011. The report emphasised that senior leadership in the ruling junta had not been prosecuted for what had happened.

The night before the anniversary of the massacre, Mohamed El Baradei tweeted, “God bless the martyrs of Maspero. A revolution that does not try those who killed its children is an unfinished revolution.”